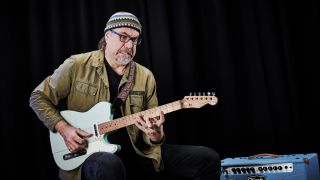 When Greg Koch’s trio hit these shores last autumn, it left many who witnessed one of their shows in a state of bewildered amazement.

With Toby Lee Marshall on Hammond B3 and Gary Koehler on drums (replacing Greg’s usual drummer, his son Dylan, for the UK gigs), the temptation might have been to compare the band with one of the great organ/guitar jazz outfits of yore, a misapprehension Greg is quick to put right.

“There is a little bit of jazz in there obviously and funk, of course, and rock, and there is plenty of humour,” he insists, “But it’s more Deep Purple than Jimmy Smith…”

He rampages his way through a rich blend of genres – one minute it’s Danny Gatton-style country rock, the next some jazz-influenced chordal phrasing, topped off with a blistering rock run complete with harmonics that seem to appear from nowhere.

It’s all fired off from his signature Reverend Gristlemaster T-style, the body of which had to be scaled up so it didn’t look like a toy in the hands of the 6ft7in Milwaukee resident. “Every time I’m playing a conventional-sized guitar,” he says, “especially if my weight fluctuates, if I’m in an eating mood, I get a bit more girth so then the guitar looks small. People say, ‘Is that a three-quarter size?’”

A musical giant, then, in all senses of the word, he goes on to talk us through the history of his playing, his love for the Telecaster, and what a player like Greg looks for in a signature amp…

Tell us about your original influences…

“Well, I always idolised Hendrix. Even from when I was a very little kid, I just thought he was the coolest individual. I did a report on Jimi when I was in third grade. I was the youngest of seven, my brother was the oldest and I was the youngest. There were five girls in between, so I had to room with my brother, so I listened to all his records. It was all Hendrix and Cream, James Gang, of course, The Beatles and The Stones, early Steve Miller and all that kind of stuff. But Hendrix just struck a chord for me, and then Cream."

“I started reading about who they were listening to them before I started playing guitar, and I would see words like BB King and Muddy Waters and Howlin’ Wolf and all these people. When I started playing when I was 12, it was kind of trying to decode Hendrix, which seemed outlandish at the time. You thought it was kind of a paranormal or metaphysical event when he played. I remember Led Zeppelin I was something I was inspired by and would play along with, too.”

So it was really a cocktail of blues-rock and pop when you began playing. Where did the country influence come in?

“There was a Clapton record that came out right when I started playing, a live record called Just One Night and Albert Lee was playing on there. When he would take solos I was like, ‘What is that?’ and so that led me down the rabbit hole of that whole style of playing pretty early on.

"It’s kind of funny, it’s like English guys got me into playing country stuff, because it was Albert Lee, it was Ray Flacke and it was Mark Knopfler. Those are my three guys that formed my entrée into that world, and then I went back and figured out who all these other roots characters were.”

Did you have any formal music training?

“I went to university to get trained in jazz guitar, because I wanted to know how to play over changes and I wanted to be conversant in music, able to write it and read it. My dad was a lawyer and he was not thrilled about number seven being a musician, because all the rest of my siblings had gone to college and were professionals and so on and so forth, and he was very much concerned that I would end up working at a car wash. Not that there is anything wrong with that, but he had stronger aspirations for myself, I think.

“I made sure that I was trained. I was always petrified, that is why I practised so much and learned all these different styles. I enjoyed doing it, but I also was filled with a sense of, ‘I have to be as prepared as possible, so I can show my dad that I’m not a troglodyte.’”

Have you always been a Telecaster player?

“Well, the interesting story about that is yes, but not because that was the guitar that I dreamed of having, it was the Fender guitar that was available to me. What happened was my first proper electric guitar was a Fender Lead 1, but, of course, I wanted the Strat because I was a Hendrix fanatic.

“There were no Strats available to me at that time and my guitar teacher was selling a ’68 Telecaster. I think I was 15. I had saved a little bit of dough and it was kind of like everything converged at the right time. My guitar teacher was selling this guitar, I had a little bit of dough and my dad was in a good mood, so I was able to get this guitar. I just started playing a Tele and I enjoyed the ergonomics of it.

“I enjoyed the fact that the onboard channel switching was already at hand, you built your solo up in the neck pickup and you went for the jugular, you went for the bridge, and that was kind of my modus operandi. The middle position was kind of cool for more sinewy, chordal things and it just seemed to work as a tool.”

Have you ever allowed yourself to be tempted away from Teles?

“There was a friend of my sister’s who married a guy that played in bands back when he was in high school in the 60s, and he had a ’65 Strat and he let me use it. I didn’t like it, because I was so used to how a Tele neck pickup sounded that the Strat neck pickup didn’t sound right to me in comparison. I enjoyed the whippy kind of splatty nature of a Tele neck pickup, so that just became my thing.

“I remember I went to a jazz camp when I was in high school and I took my Tele and I was playing in different ensembles and so on and so forth. When I hooked up with the guitar instructor, he was a really cool dude, and he was like, ‘Oh, what you’re doing is really cool. I really like your blues phrasing. If you wanted to add a little bit more jazz stuff, you should listen to these guys Larry Carlton and Robben Ford.

“He started playing me some of this stuff and I said, ‘Wow, that sounds magnificent.’ He was like, ‘They play 335s.’ At the time Robben was playing a 335, as of course Larry was. I ended up saving money enough for the summer to buy a reissued Blonde Dot Neck 335. That was my main guitar for the next many years. I always had a Tele in the arsenal, but I kind of made the leap to humbucker land.”

But you came back to the Tele-style guitar for your signature model?

“I had to wean myself off [the 335] years later, because I wanted to get back into more of those different Fender-ish type sounds. I played Strat, actually, for many years as a main guitar and then about 15 or 20 years ago Tele just became my main thing. With the way I play, it just was always a nightmare; you had to be MacGyver in order to keep a Strat in some kind of state of consistency.

“The five-way toggle switch was always something I was like, ‘Man, I like all these different sounds, but only some of them are usable in the heat of battle.’ With a Tele, you’ve got three sounds, they’re magnificent, and at the end of time, after the apocalypse, there will be cockroaches and Telecasters, and the Teles will be in tune.”

What about your signature Koch amp?

“I was at a Musikmesse about six years ago. Actually, I was doing some Fishman stuff, just hanging out at the booth, playing, doing some stuff here and there, and right across from our booth was the Koch Amplifier booth. Dolf Koch came over with his wife and we started shooting the breeze and they were like, ‘We’re fans. We’ve got a couple of your CDs.’ I said, ‘I played a couple of your amps over the years and I really liked them. Wouldn’t it be funny if we worked together?’

“I ended up using one of their Koch Twintone III amps and I really liked it. I liked the functionality of it, I liked the fact that the clean sounds are really good. It’s a clean sound that you can turn up, and when it starts to warm up a little bit the low-end doesn’t fart out and the high-end doesn’t get too spiky.

“I’d been using that amp and I really liked it and then we started conversing: ‘If we did a signature amp, what would you do different?’ I said, ‘I like 2x10s. I love Vibroluxes and if you do the cabinet right, you can have the tightness and directness of 10s and have the cabinet make it sound larger than life in terms of the low-end.’ They managed to nail that.”

What other features did you have included in the amp?

“I wanted a harmonic vibrato because I really like the sound of that Uni-Vibeesque, Fender ‘Brownface’-era vibrato. The only problem is that Fender needed three tubes in order to make that happen. Well, Dolf figured out a way to do it with two, and it really sounds good. I also wanted a little bit more of a vivid reverb.

“Their reverb was great, but I wanted more. I wanted a classic long-playing reverb with the three controls – the dwell, the mix and the tone – and they were able to do that. They recommended this thing called OTS, Output Tube Saturation, so it’s like a half-watt power amp tube that you can overdrive and then add to either channel.

“I could have my clean boost and there is a gain and a volume for the clean sound as well, so I can set that to the point where it’s just maybe giving in if I hit the second voice on my guitar. I can then hit that OTS and then it sounds just like a ‘Blackface’ amp overdriven.

“You can either go half power, which is 25 watts, or full power,which is 50. I wanted it to be Sonic Blue because I thought that was cool. People are like, ‘Is it going to be available in other colours?’ I’m like, ‘It’s Sonic Blue.’ But they are doing some in black now, which really looks cool. That is the only amp I have been using. It’s magnificent.”