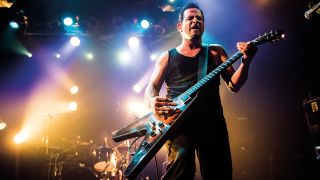 “Music has lost a lot of mystery now with YouTube and the internet,” argues Life of Agony guitarist Joey Zampella, aka Joey Z. “At one time, the only way you knew what a band was like was to see them yourself or buy the home video. What got you excited was the mystery.

"The newer generation has lost that, and music has lost its value. People will spend $15 on a lunch that lasts half an hour, but they wouldn’t spend that on an album that will last them a lifetime.

"The value of music has to return - or else there’ll be no music business.”

Perhaps it’s no coincidence, then, that the band’s scorching new album, The Sound of Scars, finds them reconnecting with another era: their early days, and - more specifically - their game-changing 1993 debut LP, River Runs Red, a concept album about a troubled teenager’s inability to cope with what seemed to be the worst week of his life.

The Sound of Scars serves as a “chapter two” to the River Runs Red saga. “We really went back to our roots on this one and tapped into the mindset we had when we first started the band,” Zampella says.

The disc - which channels influences that range from Zeppelin to Floyd to Metallica to Bowie - combines Joey’s brutal, pummeling riffs with singer Mina Caputo’s heartfelt vocals.

“I set up my studio as if I was on stage, kind of like a live scenario, with wedges and side fills in my control room,” Zampella says. “I printed a giant, 6-foot-wide banner of the crowd from Wembley Stadium at the [1985] Live Aid concert, so I had this huge crowd on my wall.

"I’d loop the song on my computer and keep playing until the guitar would go out of tune. That’s how I did the rhythm tracks, then I’d spend days finding the best ones.

"When it comes to laying down solos, I think back to what influenced me, which was guitar solos that were so memorable and melodic that you could sing them.

"My Way Out is the one exception, but that’s what’s so great about this band - we can mix everything up and it will always sound like Life of Agony.”

It’s no secret that Life of Agony’s members value their deep, long-standing connection with their audience. “I can’t tell you how many times people will say, ‘Thank you for your music - you’ve saved my life.’ We’re real people, we relate to our fans. We’ll always be out there saying hello.”