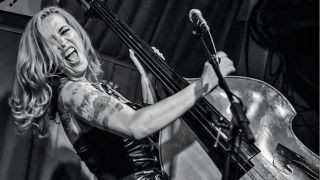 “Rockabilly’s not about sock hops and dressing up - it’s about the energy and intensity, the power of primitive, pure rock ’n’roll. There’s so much more to the scene that gets overlooked - all that great music like Little Richard. It doesn’t need to be so restrictive.”

So says Screamin’ Rebel Angels’ Laura Palmer. And, from the opening shockwave-blast whoop of Oh My Soul, the first track on Heel Grinder, the band’s sophomore album, you know exactly what she means.

With a vocal delivery that channels an otherworldly combo of Janis Martin and any great blues shouter you can possibly think of, Palmer’s voice explodes into a full-blown sonic assault.

Few covers can match the incendiary power and fury of Little Richard in his prime (hey, even Elvis couldn’t pull that off on his first album), but Palmer knocks it out of the park.

Although the band is Palmer’s project - she sings, plays slap bass and rhythm guitar, writes the songs and designs the artwork - the band has a secret weapon in guitarist Brian Hack, who’s tight solos and fills channel the rockabilly greats.

It’s the unique combination of Palmer’s voice and Hack’s killer chops that makes the magic. Although he’s ever-present on the band’s recordings, Hack doesn’t always tour. “He has a day job, so it can be hard to organize, but I always give Brian first dibs. If he can’t make it I’ll get someone else in with his blessing.”

Although it’s hard to believe now, as a kid Palmer had horrible stage-fright and thought she could never be in a band.

"I grew up listening to rockabilly and rock ’n’ roll through my parents. I started going to punk shows when I was 13, but it all came together when I saw my first rockabilly show at 17. The look, the energy, the enthusiasm. I realized this was my music and that I could do this.

“I wish I could make a living playing rockabilly, but at this stage I’m still all about earning enough to pay for the next video or album. I own all my publishing and I have complete creative control by releasing my music on my own label.

"I’m hoping Heel Grinder will raise our profile so we can start to get onto the great rockabilly festivals and show people how much more there is to this music than the narrow pigeonholes it always gets put into.”