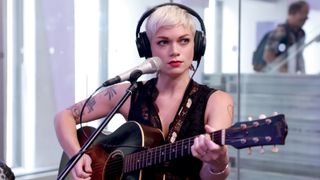 Lillie Mae and her Gibson - "My image has always been a problem for the traditional country and bluegrass audiences" (Image credit: Maro Hagopian)

The album’s haunting and eerie harmonies are juxtaposed against some downright swampy instrumentation and traditional elements that anchor Mae’s other-worldly vibe in something that’s steeped in Americana without resorting to anything remotely resembling a cliché. We recently caught up with Mae to give her the five questions treatment.

Other Girls is quite a departure from the trad-country sound of your last album, 2017’s Forever and Then Some. How’d that come about?

"It just happened naturally. I had a bunch of songs that were in the same vein and it evolved into becoming an album. I haven’t been trying to be a country artist for years. The country and bluegrass music establishment never really accepted my family, so I’m not trying to bust down their doors."

That was with your band, Jypsi?

"Yes. We signed to Arista Nashville in 2007. We looked a bit outrageous; my sister had a pink mohawk and we wore crazy clothes and makeup. The image held us back and nobody knew what to do with us.

"You couldn’t get away with anything then, so they shelved us. Our music was pretty - it wasn’t insane or anything. It’s music they’re listening to, so what does the image matter - I mean WTF, ya know? Who gives a fuck what we look like?"

Do you still think your image is a problem for you - in terms of the conservative Nashville scene?

"My image has always been a problem for the traditional country and bluegrass audiences. When I’ve played as a sideman, I’ve conformed at times, depending on what the crowd is, whether it might be older or more conservative or whatever.

"As a sideman, you definitely need to change your shit up in this town to keep getting the work. You have to respect who you’re playing with."

How has Jack White’s input helped?

"Without Jack’s help I would’ve still been doing the same thing in terms of writing and singing, but I owe him so many thanks, as he’s definitely given me a step up by signing me. He’s said so many great things about me and he believes in my music. I’m so thankful for that."

You’re an in-demand fiddle player. How important is the guitar to you?

"I usually write on guitar, and very occasionally I’ll find a melody on the fiddle. I started guitar when I was four and fiddle when I was seven. I loved the guitar from day one. I could play guitar all day. Everything comes from that."