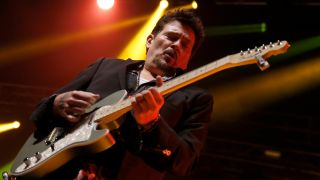 Imagine working your day job and a rock star walks in and converses with you about your favorite instrument, the guitar. That’s exactly what happened for Mike Zito, who met Chuck Berry on a few occasions while he was working at a guitar store in St Louis.

Zito has called St. Louis home for over 30 years. He worked at a popular guitar shop (now Eddie's Guitars) from the age of 18 to 30. Berry, who also is from St Louis, stopped by on a few occasions. Longtime Berry pianist Johnnie Johnson and Chuck’s son Chuck Berry Jr also visited occasionally, and Berry’s drummer was also employed at the store.

The chance encounters eventually led to Zito getting to open for Berry. “I can't tell you that I was this man's friend, but he was just very nice to me and I got to play with him sometimes,” said Zito. “So, he definitely made an impression on me.”

Berry’s influence was everywhere he looked. For many years, seeing Berry at Blueberry Hill was like clockwork. “They have a venue there called The Duck Room, and that was a tribute to Chuck, and he played the last Wednesday of every month,” recalled Zito.

Between the run-ins and hours of listening to Berry’s music, Zito couldn’t help but use Berry as inspiration as he’s navigated his own path as a professional musician.

“I was enamored with the guitar playing. He set the bar for rock and roll,” said Zito. “But as I got older, I realized his real true gift to rock and roll, besides that guitar, were those lyrics. And my God those songs, they're incredible how good those lyrics are.

There were songs at that time where it was just kind of repetitive, say the first line, say the same line, the second line, kind of repeat, just real simple. And he really told stories that are much more descriptive and very impressive to me.”

“It's the storytelling and the use of the words. A lot of times in guitar music, unfortunately, songwriting gets put on the back burner. It's not the most important thing a lot of times, it's just the guitar playing, but not in Chuck Berry's case. The song is everything, and the guitar playing is a part of the song, and that's what's really drawn me into his catalog and his music.”

It’s why he decided recently to pay tribute to his music hero on his latest album, Rock N Roll: A Tribute to Chuck Berry. He got the idea for the album a couple years ago. Since he was friends with many guitarists, he thought it would be an exciting proposition to make a tribute album.

“Chuck Berry was at the top of my list because I just love his music, and I love his guitar playing,” he said. “And I thought, ‘Wouldn't it be cool to just do something and kind of celebrate that?’"

“I'm fortunate enough to be friendly with pretty much every guitar player that's on the record,” said Zito. "Some of them I'm very close with and some I'm getting to know, and some I've known a long time.”

Fortus, who plays on Maybellene, was an easy choice. He was Zito’s first guitar teacher when he was 14. “I took my first lessons from him,” said Zito. “And as he was becoming famous in St. Louis, I was working at that store and he was coming in the store.

"So, it's amazing to me now after all these years later, one, he plays guitar with Guns N' Roses, and that we remained friends and he was able to play on the record with me as well."

In deciding who would play what, he wanted to pair the song with a guitarist who would really shine and play to their strengths. But most importantly, he wanted some spontaneity in the record.

For example, he felt Alex Skolnick’s experience in metal would lead to a unique take on Down Bound Train.

“Alex plays jazz and everything, but he's best known obviously for playing in Testament, playing metal and shredding, and I thought, ‘Well we have to incorporate different styles of guitar playing on this record to make it interesting,’” said Zito. “So, being that it talks about all these kind of dark imagery, it just hit me right away like, ‘Well sorry to stereotype you, Alex, but that's the song that you need to play on.’”

For Berry’s most popular hit, Jonny B. Goode, Zito had two guitarists in mind - Joe Bonamassa and Walter Trout. Bonamassa made the choice easy, suggesting he pick Trout because "he’s our hero.”

“Walter Trout is Joe's hero and my hero, and Johnny B. Goode is the ultimate guitar hero song,” Zito said. “Plus, he's going to play it with the same fervor that Chuck played it originally, like a kid in a candy store, like a garage band. It's going to be really loose.”

The process of selecting guitarists made Zito realize the impact Berry continues to have on each new generation. That includes 20-year-old Ally Venable, who takes on School Days and Berry’s grandson Charlie Berry III, who plays on St. Louis Blues.

"My hope is that younger people will get to hear this great music because to me his music is timeless,” said Zito. “The other youngest guitarist on the album is Chuck's grandson, Charlie Berry III, who's like 22 or 23.”

Creating the album was a time-consuming but ultimately rewarding endeavor for Zito. He would record the basic tracks with his band at his own Marz Studios and email them to the guitarists and have them add their part. The songs were later mixed and mastered by David Farrell.

“We started to work on these basic tracks at the end of 2018 and the beginning of January 2019,” said Zito. “My group cut basic rhythm tracks with piano, bass, drums, and I did rhythm guitar, and I sang like scratch vocals, and we got all of the arrangements down. So, I left room in there for the other guitar players and the solos.”

For example, Zito originally recorded Wee Wee Hours very traditional but re-recorded his vocals after Bonamassa added more fire to it on guitar. Zito recalls Bonamassa texting him, “Hey man, I'm getting ready to record this track. Do you want me to play it traditional or do you want fire and fury?"

“I said, ‘Man, I want fire and fury. By all means.’ And he just blew the doors off,” Zito said. “So, when I got it back, I was just ecstatic. It sounded like Joe and it just reminded me he can play that stuff like nobody's business. But the vocal didn't match to me at all then because he was really rocking and I thought, ‘Okay, you need to sing this again to get in there and really match it or it's going to sound off.’"

It was a longer process than Zito is used to but he’s proud of the album he made. “To me what makes me proud is that all these people are tight enough to want to help me make this record, and they know that I'm doing it for all the right reasons, because I want to celebrate all this great music,” said Zito.

“The thing I'm most proud of with the album on my part is the production of making it sound and feel like we're having a really good time. You can't outdo what Chuck already did. I mean, you can't be better than what he's done. We're trying to celebrate his music, have fun with it, and hopefully it sounds like it wasn't phoned in, that we did perform together, that we did play together.”