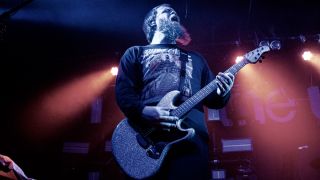 With hundreds of thousands of subscribers and followers on YouTube and Instagram driving millions of views per video, it wouldn’t be unreasonable to call Ryan ‘Fluff’ Bruce a modern-day guitar star.

The Seattle-based host of Riffs, Beards & Gear has demoing equipment for the last decade or so and with great success, combining his knowledge of all things guitar-related with high production values and - perhaps most importantly of all - a good sense of humor...

“The basis of my YouTube channel was simply not being able to find what I was looking for,” he tells Guitar World, while out on the road with his band Dragged Under.

“I think at the time I was shopping for an overdrive pedal and the only guy who had a comparison between the two pedals was a guy called the Tone King - or Louis - and he was the only one. This was 2009 so he was using the camera audio. Early on, the production value of any YouTube video wasn’t that great. I thought maybe I should make my own comparisons.”

He pondered on this idea for a while until chancing upon a forum where two users were arguing over how a Shure SM57 would fare against an Audix i5. It would have been a fruitful discussion if either of them had actually owned said microphones - though disappointingly, in this case, they did not…

“And despite having never A/B’d those microphones, they were still trying to argue the differences between the two!” laughs Fluff, with perhaps a small sense of gratitude. “That’s what made me decide to go for it. I posted my first one and got 100 views. I thought, ‘Well, that’s it... I’m famous now!’”

It’s exactly that kind of sense of humor that helped pave your road to success...

“Sure man, people want to see the human element. Back then, YouTubers were just finding their way. It’s easy to forget there was literally just a handful of people doing this. I like to call them The Big Three - there was Paul Riario from Guitar World, Brian Kehoe over at Dunlop and then Doug Doppler.

And all of three made amazing videos with high production value but they’d also be cracking jokes at times. Brian would be with Alice In Chains and have a laugh about drinking beer… it felt more like a hang than some school/educational thing. It didn’t feel like a doctor’s office.

It felt like being backstage at a concert. That’s where I got my sense of looseness. Sure there’s a goal - you’re trying to get from A to B - but it’s okay to make fun of yourself along the way.”

Some might say the online guitar scene has gotten a bit too serious and competitive in recent times...

“You can definitely sense the competition these days (laughs)! I didn’t take any sides on that whole fake guitarist thing. If you can’t spot a sped-up player, then you also deserve to believe in Santa Claus and the Easter Bunny.

"But more importantly, who cares? I have better things to do than police Instagram. I thought it was all ridiculous and was blown away by how much time people had to devote to something like that. So I never commented.”

What other advice could you offer someone trying to grow their own guitar channel?

"A lot of the newer guys get hung up on that… but I can tell you there’s not a lot of money in YouTube-ing, per se. There is, however, always room on the top shelf for the best and if you are good enough, people will recognize it and share it around. You will get your comeuppance, so to speak.

What’s been your biggest realization during all the years testing and A/Bing different kinds of gear?

“I’ve noticed that the differences between the mid-level things, like a Marshall 800, and some crazy boutique thing isn’t that much at all in tone. I mean, it’s several thousand dollars in price difference, but you can get the sounds you need out of either one of them. The more expensive amp will have more bells and whistles, switches and knobs, but the core tone will be pretty similar.

"Once you get past that $2,000 mark, especially with amplifiers, the differences are smaller - they’re not world leaps of tone. And I would say the same thing for guitars... if you play $2,500 for something, it will be just as good as $5,000 Private Stock thing made in the Appalachian Mountains or whatever. Both will be set up great.

"It just boils down to fancy woods, which don’t make a guitar play any better. Once you get past a certain threshold with anything - pedals, guitars or amps - the differences are small, despite what their marketing departments like to tell you.

So who are making your favorite pedals right now?

“I don’t know if he’s a newcomer any more but I love what Josh [Scott] from JHS is doing. He doesn’t give a shit. He’s just doing what he thinks is awesome. I also have to mention Rick Matthews over at Matthews Effects. He makes this insane one called The Astronomer, amongst several others.

"I’d say he’s one of the few young guys in the pedal game! Rick is in his 20s, he loves designing pedals and he utilizes tech but he loves the old school... so he kinda marries them. For example, he might make a really old school pedal but with digital knobs so you can save your presets.”

You were part of Tom Morello’s Guitar Revolution earlier this year, along with names as revered as Nuno Bettencourt, Billy Howerdel and John 5...

“I got a call from the production agency who were putting together the event. What Tom’s team were looking for was someone who wasn’t a traditional shredder… they asked me how I thought I’d come at it and I told them it definitely wouldn’t be the playing side - not against Nuno, Tom and John 5. That would be insane.

"But I saw Billy was there, and he’s not a shredder. He’s a songwriter and his compositions are incredible. So I said I would do a course on how to be a modern guitar player in today’s world, utilizing social media and all the tools to get your stuff out there. Apparently Tom really liked the idea so they said, ‘C’mon down!’ with a couple of plane tickets attached to an email. It was pretty surreal, if I must say…”

What do you remember about your time there?

“Watching Tom soundcheck was crazy. His tech was super-cool and everyone was super-nice. Bibi McGill, who is Beyoncé’s guitar player, was also there and she was incredibly nice.

"Vernon Reid [Living Color] is a hardcore gear nut, we talked about Helix presets for about an hour after meeting. And Billy was one of the more humble guys I’ve met in this industry. I can’t say enough good things about him. Tom was super-cool, I only met him once or twice in passing because he was so busy running everything and being the main attraction for the Guitar Revolution.”

What kind of gear do you use in Dragged Under?

“For the album, there were no amps used… which always shocks people! It was a JST Toneforge Jason Richardson and a Kemper profile of a highly modded JMP Marshall. Matt Good mixed the record, he played in From First To Last back in the day, so really nailed the guitar tones.

"For recordings I have a one-off Music Man Valentine burl top which is like my magic guitar, it has this crazy percussive nature to it. We also used a Balaguer Growler with Devin Townsend pickups, but mainly stuck to the Fishman Killswitch Engage pickups for that super tight percussiveness that this kind of music requires. That was it, all DI’d into a Macbook and Macbook Pro.”

And how does that all differ to what you use live?

“When we started playing live, we were using real amps. I got tired of hauling them, they were too heavy and too delicate. Plus the different voltages would make them sound different. Now we all use [the Line 6] Helix live running direct into front of house, including our bass player.

"We do run cabs, but those are for ambient purposes for in-ears. It sounds clean, awesome and huge. It’s very satisfying to have something so small and compact doing all the hard work. Live, I just play Music Man - this Custom Stingray RS that has a blue sparkle and black pickguard. It’s the most reliable guitar I’ve ever picked up - it doesn’t care how wet or cold it gets.

"The other guys use Ernie Ball guitars, too. It goes into the Helix, I use the Revv Generator amp, everything is in that box - except for a [Electro-Harmonix] POG which goes in the loop along with a noise gate. The Helix’s octaver isn’t polyphonic and doesn’t track as well in my opinion. I’m a Line 6 artist - I’ve been with them for a long time I and know they are working on some huge changes on that front.”

You’re also a Fishman artist. What made you sign with them over any other pickup manufacturer?

“I love their pickups, especially the Fluence stuff. Duncan, DiMarzio, Lollar all make great pickups. But no two pickups are ever the same because of how they are copper wound on a bobbin and whenever two pieces of wire touch you have a phase relationship.

"Duncan and DiMarzio have the experience to know what works and what doesn’t. But there’s a big difference with the Fluence pickups: they use a pancake effect - one copper, one not, built almost like a 3D printed pickup. It means they can tune the magnet exactly how they want to and it even a million times down there will be no variance.

"There’s no phase relationship so you get an incredible detailed attack and clarity across all strings. It’s like an HDMI cable. Or 4K guitar… which is useful when you are using a lot of gain. I couldn’t unhear the muddiness of regular pickups after trying the Fluence.

"My favorite passive pickup of all-time is still a Duncan JB - it’s one of the greatest ever made. The DiMarzio Super Distortion was the first one I ever bought. Bare Knuckle are great too, but Fishmans definitely work best for me.”

Dragged Under's debut album, The World Is In Your Way, is out now.