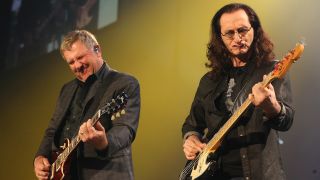 In this classic interview from 2009, Rush guitarist Alex Lifeson and bassist Geddy Lee choose 60 minutes' worth of the music that is closest to their hearts.

From Hendrix to Led Zep, Buffalo Springfield to Tool, this collection of songs is essentially the ultimate Rush-approved mixed tape. Enjoy.

"I fell in love with music because of this song. It was the first single I bought. I was around 11 years old, which was about a year before I started playing guitar.

"It’s a song about the Bismarck, a German battleship that sunk during World War II. It’s a very thematic, rousing song. I think I mowed two lawns or something to make enough money to buy it."

2. Buffalo Springfield - For What It's Worth

"This was the first rock song that had a big influence on me. I remember hearing it on the radio in my dad’s car when I was a kid. Buffalo Springfield were unlike the other bands of the ‘San Francisco sound’; they were more country sounding. Stephen Stills and Neil Young trade leads on this one.

"I like Young’s very fast vibrato and edgy, truncated playing style, particularly on his soloing, whereas Stills’ sound is sweeter and smoother. This is still one of my all-time favorite songs. In fact, Rush did a version of it on our covers tribute EP, Feedback."

"This is another song we covered on Feedback. Jeff Beck has a tone like no one else, maybe because he doesn’t play with a pick very much. He also has a very strong left hand and can move the strings almost effortlessly.

"He’s still cranking it out today, but he doesn’t put out albums as often as I’d like; he works only when he feels like it. Before Truth, Beck was an integral part of the Yardbirds, and their recording of this song is great. But this version, with Rod Stewart’s voice on top, adds a whole new element to the song. It sounds tougher, bigger and beefier."

"Pete Townshend is one of my greatest influences. More than any other guitarist, he taught me how to play rhythm guitar and demonstrated its importance, particularly in a three-piece band.

"His chording and strumming always took up the right amount of space. The first time I heard this song was in the basement of Rush’s original drummer, John Rutsey. John had two older brothers, both of whom were music fiends, and they always had whatever new album had just come out."

5. Jimi Hendrix - Are You Experienced?

"This was another record I heard for the first time at Rutsey’s place. What attracts me to this song is all the backward stuff. It sounds so alien but so right and perfect.

"Hendrix was a natural genius who played many beautiful styles. Talent as great as his doesn’t come through life very frequently. Hendrix was one in a billion."

6. Jimi Hendrix - All Along the Watchtower

"This is one of the most beautiful songs and arrangements ever recorded. Hendrix took a Bob Dylan folk song and turned it into a symphony. The acoustic guitar on this song [played by Dave Mason] has such beautiful compression.

"It doesn’t slap you; it caresses you. This song grabs your heart and sails away with it; it sounds unlike anything anyone has ever done. That was the magic of Hendrix: even if you copied what he recorded and tried to play like him, it could never be the same."

7. Led Zeppelin - How Many More Times

"Of any guitarist, Jimmy Page was my biggest influence. I wanted to look, think and play like him. Zeppelin had a heavy influence on Rush during our early days. Page’s loose style of playing showed an immense confidence, and there are no rules to his playing.

"I met Page at a Page/Plant concert in Toronto in 1998. I was acting like a kid, all googly eyed. I was freaking out and my hands were shaking. I was so thrilled to meet him because his work meant so much to me."

"This is an absolutely brilliant song, an all-time classic. ‘Kashmir’ has such a wonderful, exotic Middle Eastern feel to it - it’s like no other song of its era - and Physical Graffiti is a mind-blowing album.

"In a roundabout way, Kashmir influenced A Passage to Bangkok, which has a similar sort of odd-tempo arrangement to the verses."

9. The Rolling Stones - (I Can't Get No) Satisfaction

"This was the second single I bought. One summer when I was 12, I went to Yugoslavia to visit my relatives. I took one record with me - this one. I played it for my relatives because I wanted my cousins to hear it.

"The Stones had that bluesy, dirty, bad-boy image, which I much preferred to cleaner-sounding bands like the Beatles or the Searchers. The Stones were more dangerous than other bands of the '60s. It looked like they had more fun than the Beatles - like they stayed up later.”

"David Gilmour is so well respected, and while he’s often overlooked among guitarists, I think people who appreciate rock guitarists regard him as one of the best.

"He’s a brilliant player and has such passion and feel. You can sense he’s a smart man: you can hear how he puts it all together and how it fits, which is a real testament to his songwriting. He’s such a bluesy player, to boot. My eyes water whenever I hear this song.

"Pink Floyd have such incredible arrangements; their songs are rich and complex but not particularly complicated. They can take as long as they want to tell you a story, but it’s always interesting."

"Allan Holdsworth has an amazing, out-of-this-world liquidity. What a genius! His fingers are constantly moving. Pulls make up the bulk of his playing; I don’t think he does much picking.

"I was listening to Holdsworth around the time of Moving Pictures [1981], and you can indirectly hear his influence on my playing on YYZ."

"Adam Jones is a fabulous guitarist and songwriter, and Tool are such a powerful band. You know it’s Tool when you hear them, because they’re intensely dynamic, yet heavy, even when their playing is light. I listened to this album over and over; I don’t do that very often.

"Tool have an interesting, intelligent approach to song construction and lyrics. It’s just too bad we don’t hear from them more often."

"I’ve never heard anybody with a better tone than Eric Johnson! He played with us on a couple of tours and I’d watch his performance most every night.

"There’s a smoothness to his playing that is so elastic. Eric is very accurate and articulate but soulful at the same time. If anybody could come close to playing like Hendrix, he could."

"In my view, this is the first truly successful concept album by a British prog-rock band. They even brought a flute into heavy rock music. How dare they! [laughs]

"Their music is so brilliantly written and well put together, what with its hard-to-play parts and odd time signatures, not to mention the great guitar sounds of the totally underrated Martin Barre.

"And I love how, no matter what influences they brought into the music, from classical to folk, they always did it in a rock context."

"Chris Squire had such a driving, aggressive sound, and it made this such a pivotal, influential song for me. Squire’s melodies were brilliant, and they were definitely out there.

"But they were always essential to the skeletal forms of those songs; he never wandered off out of context. His lines help hold the songs together."

16. Led Zeppelin - How Many More Times

"I saw them in Toronto at a little place called the Rockpile. We were in the second row, and when they played this song it just blew me away. It reaffirmed for me all the creative potential in blending hard rock with progressive music. John Paul Jones was the unsung hero in that band.

"What bass player of that period didn’t know how to play that riff? I still jam to it sometimes at soundchecks."

"If I had to pick a favorite guitarist of all time, it would probably be Jeff Beck. I mean, was there a better guitar sound ever? I think this was the first great Jeff Beck ‘moment,’ the first time when you’d hear something and know that it couldn’t be anybody but him. He was such an amazing pioneer, and just an incredible stylist.

"The notes he squeezes out of that thing with a whammy bar, a volume control knob and his fingers are simply incredible."

18. The Yardbirds - Over Under Sideways Down

"Jeff Beck again, playing one of the most unique guitar lines ever. It’s really hard to play that thing - it manages to grab something essential from the Eastern quarter-tone style without just being imitative of Indian music.

"And it’s the hook to a pop song - back when pop, particularly in England, could be a platform for experimentation and innovation. Beck, Page, Clapton and some other Brits really discovered a totally new sound.

"They figured out how to get a pop angle on the blues by electrifying it, and it became a profound way for guitarists to speak through music."

19. Genesis - Watcher Of The Skies

"This is a very strange, ominous tune from very early Peter Gabriel-era Genesis. The time signature was completely odd - it was a little like Yes, but darker and much more theatrical.

"The music wasn’t about people stepping out and doing bluesy solos; they were taking a high level of musicianship and weaving it into the guts of the song, playing with layers of melody, odd time signatures and strange guitar riffs. What fascinated me was how these intricate parts all supported one another - and the song."

"A great live record, where the band takes some risks and really changes the arrangements, especially rhythmically. Jack Casady, one of the truly great, underrated bass players, is the star of this record.

"His tone was very different from other American bassists; it was edgier, and his riffs were really challenging - they aggressively pushed the songs along. I like when a bass player gets a little pushy and won’t keep his place. He steps out of line, but in a great way.”

"Crossroads was the song you had to learn to play if you were in a band. Clapton just flies through that song. But for me, ‘Spoonful’ was more about Jack Bruce’s great voice and adventurous playing. Bruce, like all the bass players I’ve mentioned, wasn’t content to be a bottom-end, stayin'-the-background bassist.

"He’s playing a Gibson bass obviously too loud, to where it’s distorting the speakers. But it gave him this aggressive sound and a kind of spidery tone, and I love everything about it."

"What an amazing guitar sound on this album! And [Pete] Townshend even plays a few solos, which he usually never does. Was there anybody better at expressing themselves through power chords?

"I just loved that record, and I know Alex did, too. Every time we jammed as a young band we would wind up jamming parts of that record."