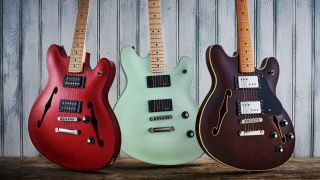 What do you first think of when you see or hear the word ‘Fender’? It might be your favourite Stratocasters or Telecasters, or perhaps you might picture the Jaguars, Mustangs or Jazzmasters that left an impression on you over the years.

In that sense, the Starcaster has always been the ugly duckling in the Fender family tree. Though sadly the Starcaster went out of production only six years after its 1976 debut, an unlikely revival came after its adoption by indie-rock musicians who actually preferred the brightness that put the majority of its intended target market off – bands like Radiohead, The Killers and Arctic Monkeys harnessed the jangliness to their own advantages.

Its four-stringed sibling has been spotted in the hands of Royal Blood frontman Mike Kerr – another musician who certainly knows a thing or two about sounding big.

Naturally, it made perfect sense for Fender to introduce an upgraded, modernised Starcaster in 2013 as part of the Modern Player series, though in more recent years the model has been absent from their catalogue – until now, that is. With three new models from Fender’s wallet-friendly Squier off shoot, aimed at different types of players.

The flagship in this new line, the Classic Vibe, could very well be the best semi-hollow out there for under £500. Don’t be fooled by the small ‘Crafted in Indonesia’ print on the back of the wonderfully oversized headstock, it’s the kind of weapon that could quite easily hold its own against American-made instruments retailing over four times as much.

Before being plugged in, this particular model in a walnut finish (also available in Natural and Three-Tone Sunburst) feels exceptionally loud for a semi-hollow electric – with remarkable sustain and powerful acoustic resonance. It also oozes class, thanks to the combination of its stylish bound f-holes, 3-Ply black pickguard, retro skirted amp control knobs and tinted gloss urethane neck finish.

The most obvious difference between these revamped Starcasters and the 1970s’ originals is found in the bridge – these newer models fitted with a stoptail instead of the string-through-body versions of yesteryear.

The Fender Wide Range Humbucking pickups are well-balanced and responsive – and so they should be, considering they were initially conceived by Gibson’s humbucker inventor Seth Lover when Fender cunningly drafted him in at the turn of the 70s.

The neck pickup is both articulate and warm, though unlike the Starcasters of old, can be tamed easily for woolly jazz tones à la Joe Pass. The bridge pickup is more versatile still, taking full advantage of the instrument’s bright, natural harmonics for well-rounded clean and distorted tones, packing enough bite for higher-gain playing without sounding over-compressed on quieter settings.

Feedback is relatively minimal for a guitar of this type, though will become an issue when brought in close proximity of loud amps on extreme settings – something which more experimental players will be only too happy to explore.

Power for the modern player

Just as its name promises, the Contemporary Active Starcaster brings a very classic design into the modern age. The most noticeable changes on these models are the inclusion of Squier’s SQR active ceramic humbucking pickups, black chrome hardware, a PPS nut instead of bone, no pickguard and no f-holes. Instead, the body is sealed body for minimised feedback.

There’s also just one overall master volume and tone control instead of a pair for each pickup, as on the Classic Vibe, but that shouldn’t matter too much: this is very much an instrument designed for rock and metal musicians who prefer everything louder than everything else – as Deep Purple once famously asked their soundman.

This particular Surf Pearl finish is certainly eye-catching, as is the Ice Blue Metallic version, though there’s also a more understated Flat Black option for those in favour of simplicity.

The SQR ceramic humbuckers might look a lot like your favourite EMG set, but do they sound anywhere near as thunderous? Actually, very much so – this set mimicking the same kind of scoop and power heard on some of the most classic heavy metal albums ever recorded.

Blast picking on the neck humbucker feels every bit as percussive as it would on guitars fitted with the Zakk Wylde set, and similarly the bridge pickup roars and squeals without compromise no matter what you throw at it. Of course there is a trade-off with high-output ceramic humbuckers of this ilk – clean tones don’t feel truly clean and can sound too compressed.

But if you’re generally going to be playing on lead channels or higher-gain settings, it makes perfect sense to trust in an instrument suited to that. Being a sealed semi-hollow, the Contemporary Active has even less issues with feedback, though much like the Classic Vibe can still offer a whole world of noises that solid-body guitars aren’t capable of.

Best of all, it’s all easy enough to control and manipulate via the two control knobs – though simple and elegant, this guitar is every bit the high-powered modern monster it claims to be.

Priced at roughly two-thirds of the Classic Vibe, the Affinity is certainly enticing in terms of sheer value for money. It’s made from the same tonewoods as its bigger brothers and its hardware specs are virtually identical… so what’s the catch?

Naturally, there are a few sacrifices that have to be made in order to keep costs low – starting with the open-coil Squier Standard humbucker pickups, which are a noticeable step down from the Wide Ranges found on the Classic Vibe models. They’re not bad-sounding pickups by any means, and undoubtedly among the better options at this rock-bottom price point, it’s just that there’s a bit less definition and overall sparkle to them – which, admittedly, is to be expected.

There’s also no stripe along the bottom of the oversized headstock, no white binding around the f-holes and no pickguard – and while none of these additional cutbacks affect the sound of the Affinity models, they do forfeit some of the visual magic inherited from the design of the 70s originals.

Like the Contemporary Active, this Affinity Starcaster features a PPS nut instead of bone, only one master control for volume and tone respectively and there’s no tinted gloss urethane finish on its maple neck, which also diminishes its vintage charm somewhat.

Though it shares the exact same wood spec and open f-holes, the body itself is ever so slightly less resonant unplugged when compared to the Classic Vibe – which, of course, combined with the downgraded pickups has a knock-on effect when it’s all amped up.

What you do get, however, is a no-frills instrument with more simplistic features (available in Candy Apple Red, Black, Three-Tone Sunburst or Olympic White) at a discounted price – which, most importantly of all, sounds and plays to a decent enough standard.

Truth be told, it’s not easy to find guitars produced to this quality under the £300 mark and that’s exactly why it’s an instrument worthy of high praise indeed. Ideal for those starting out who desire a more unusual design than a Stratocaster copy.

Squier's SQR active ceramic humbuckers are super-hot and are here controlled by the lower bout's volume and tone knobs, with a three-way toggle switch located on the treble horn.

The Affinity Starcaster's Squier Standard humbuckers are not as exciting as the Fender Wide Range pickups on its siblings, but at this price some sacrifices have to be made.

With this latest line of Squier Starcasters, Fender have done incredibly well to reimagine an old tradition, capturing the spirit of the originals while also modernising and upgrading to various degrees. As per the 70s Starcasters, each of the models feature the selector toggle underneath the pickups themselves, which some players may find takes some getting used to.

If the Classic Vibe wasn’t so moderately priced, the Affinity perhaps may have fared better in this test – and regardless still offers unbelievable value for money. But the financial margin between the two models is so small, it’s almost negligible, and that’s precisely what makes the flagship our hands-down winner here.

Both guitars are incredibly versatile and noticeably less dark-sounding than the mahogany-necked Gibsons that inspired them, courtesy of an all-maple build that rings loud in the upper mids. And that’s not to say the Contemporary Active doesn’t have its place. Far from it – the option for unusual finishes, hotter scooped pickups, black chrome hardware, and sealed body make it an incredibly contemporary metal machine capable of mustering some truly earth-shaking sounds. It might not do everything, but what it does, it does incredibly well.

In summary, it’s a most welcome return for one of Fender’s more unusual inventions.