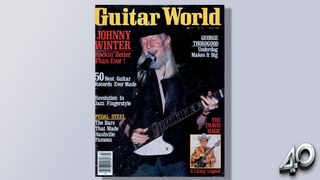 #GuitarWorld40: In 2020, Guitar World marks its 40th anniversary. To celebrate this momentous occasion, we’ll be sharing key moments from the magazine’s storied history, taking you inside the guitars, the stars and the bizarre from 40 years of the world’s biggest guitar magazine.

Let’s start where it all began: issue 1, which first set newsstands alight in July 1980.

Some men need no introduction. Larry Smuckler, Arthur J. Maher, Richard Kahl and Larry Cohen are not those men.

But while their names may be unfamiliar to you – frankly, we’ve never heard of them either – the inescapable truth is, Guitar World is a direct outgrowth of their work and passion. For 40 years, Guitar World’s editorial staff has been one of the most exclusive fraternities around, and these guys are charter members. Without them, there would be no Steve Vai 30-hour guitar workouts, no Eddie Van Halen exclusives, no transcriptions of your favorite songs.

When Guitar World premiered in July 1980, shredding was something you did to financial records, hammer-ons sounded like a drinking game and plugging a guitar into your computer... well, who the hell had a computer? In his first editor’s page, Arthur Maher wrote that he envisioned GW becoming a guitarist’s “source-book” – informative, thorough and eclectic – and from the start it was exactly that.

True, the writing was formal and pedantic, and the lineup, even by 1980 standards, was far from cutting edge. In addition to cover boy and blues legend Johnny Winter, the 82-page issue included an exhaustive article on pedal steel guitar, a comprehensive list of the 50 Best Guitar Records Ever Made (No. 1 in Rock: Lonnie Mack’s 1963 single, Memphis), a Merle Travis-penned article on his influences, and detailed analyses of jazz and country finger-style playing). Still, the template had been undeniably set.

Like music itself, Guitar World isn’t static. Over the past four decades, we’ve gone through phases and periods of reinvention. Sometimes it’s been frustrating: are we too far ahead of the curve, or a little behind? Mostly, it’s been a full- on blast. Funny thing is, we feel like we’re just getting started…