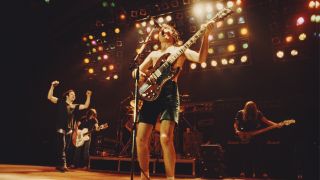 Back In Black is many things. With more than 50 million units shifted, it is the biggest selling rock album of all time. For many, it is also the greatest hard rock record ever made.

It was the album that turned AC/DC into superstars, and it has been inspiration to countless rock bands for 40 years, from Def Leppard to Metallica, Guns N’ Roses to The Darkness.

Most remarkable of all is what Back In Black represents on a human level, for AC/DC’s greatest success followed their darkest hour: the death of their singer Bon Scott.

Most bands would have been broken by such a loss. But with Back In Black - “our tribute to Bon,” as lead guitarist Angus Young called it - AC/DC pulled off the greatest comeback in rock history. It is, in the words of Slash, “One of the huge Cinderella stories of rock ’n’ roll.”

In January 1980, when Angus and his elder brother Malcolm, the band’s rhythm guitarist, first began work on the album with Bon Scott in London, they knew they were on to something big.

In the seven years since AC/DC had formed in Sydney, Australia - with Angus, dressed for the stage in his old schoolboy uniform, an unlikely looking guitar hero - they had built up a strong international following via relentless touring and a series of brilliant, balls-out albums, including Dirty Deeds Done Dirt Cheap, Let There Be Rock and Powerage, the latter a favorite of Keith Richards.

But it was with 1979’s Highway To Hell that they had a major breakthrough, their first million-seller. And in the new songs they demoed in London, with Bon playing drums, as he had done as a young man in his first groups back in Australia, there was such potential that Bon had told his mother Isa in a phone call: “This one is going to be it!”

It was only a few days after that call - on February 19, 1980 - that Bon Scott was found dead in East Dulwich, London. He had been out drinking with friends on the previous night.

Unsubstantiated rumors suggested that he might also have taken heroin. In the official inquest, the coroner cited ‘death by misadventure’. He was just 33 years old.

Angus spoke for the whole band when he said, “You feel immortal until something like this happens.” But at Bon’s funeral in his hometown of Fremantle in Western Australia, his father Chick urged Malcolm and Angus to carry on with the band. And on April 1st, Brian Johnson, then aged 32, formerly of glam rock act Geordie, was announced as AC/DC’s new singer.

Those were big shoes that Brian Johnson had to fill. Bon had had it all: a powerful voice, a witty turn of phrase in his lyrics, and a macho stage presence that was the epitome of rock ’n’ roll cool.

As drummer Phil Rudd said, “Bon was such a character.” Moreover, he was, for Malcolm Young, a talismanic figure. “He pulled us all together,” Malcolm said. “He had that real stick-it-to-’em attitude. Bon was the single biggest influence on the band.”

But in Brian Johnson, they found the right man for the job, and as it transpired, even Bon had been a fan of Brian’s. Back in the early '70s, Bon’s old band Fraternity had opened for Geordie on a UK tour and witnessed what he later described to Angus as the best Little Richard impersonation he’d ever seen from a singer rolling around on the stage and screaming his head off.

As Angus said of that conversation: “It was rare that Bon ever raved about anything.” What Bon hadn’t known was that Brian Johnson had been screaming in agony that night, and had subsequently been rushed to hospital suffering from appendicitis.

After Brian was broken in during rehearsals in London, the band travelled to the tropical island of Nassau in The Bahamas to record Back In Black at Compass Point Studios with producer Robert John ‘Mutt’ Lange, who had worked on Highway To Hell and would later produce multi-million selling albums for Def Leppard, Foreigner, Bryan Adams, Shania Twain and more.

In just five weeks, AC/DC had the whole album in the can, and it was the first song recorded, the album’s title track, which set the tone. It was also one of the numbers demoed with Bon back in London, with a funky, stop-start riff and a lyric that was both a statement of invincibility and a salute to Bon.

As Brian said, “The whole point of the album was to celebrate Bon’s life.” There were times, however, when Brian struggled. Firstly, when the band was working on Hells Bells, the mighty epic they had already marked as the first track on the album.

The riff - dubbed “ominous” by Malcolm and “mystical” by Angus - called for a heavy opening statement, but Brian just couldn’t find the words, until Mutt Lange said something that flicked a switch in Brian’s head. A storm was breaking over the island.

“Rolling thunder,” Mutt noted. Brian took the phrase and ran with it: “I’m a rollin’ thunder, pourin’ rain, I’m comin’ on like a hurricane.”

Brian also felt, at times, as if Bon was watching over him. “I was a little worried,” he said. “Like, who am I to try to follow in the footsteps of this great poet? Bon really was a kind of poet. And something happened to me - a good thing.” Angus had similar experiences.

“We still think Bon’s around,” he said. As Malcolm explained, “All these emotions were in play when we were recording.” The last song recorded ended up as the last song on the album. Malcolm and Angus wrote it in 15 minutes: a slow, swaggering boogie number they called Rock And Roll Ain’t Noise Pollution.

An anthem was born, and Back In Black was complete, save for one detail. In May, during the mixing of the album at Electric Lady studios in New York City, Malcolm had a flash of inspiration while taking a wee.

What was needed, he decided, was a tolling bell at the start of Hells Bells: a dramatic flourish. The engineer, Tony Platt, was dispatched across the Atlantic to record the bell at a grand old English church in Loughborough, only to find that he couldn’t get a clean sound because pigeons roosting in the bell-tower flew off noisily every time a note was struck.

As a result, Platt commissioned a custom-made bell from a specialist foundry in Leicestershire. And with that, the job, finally, was done.

When Malcolm returned from New York with the finished album, his brother knew they’d nailed it. As Angus later recalled: “When I first heard it in all its glory, I thought, ‘F*ck - it’s magic!”

There was a dispute over the album’s cover. The suits at Atlantic Records felt that an all-black design would be bad for business, but the band would not yield. The black cover was in memory of Bon. There was no backing down on that.

Back In Black was released on July 21st, 1980 - five months and one day after Bon Scott had died. Rolling Stone writer David Fricke declared the album a masterpiece and a milestone in rock.

“Back in Black is not only the best of AC/DC’s six American albums,” Fricke wrote. “It’s the apex of heavy metal art: the first LP since Led Zeppelin II that captures all the blood, sweat and arrogance of the genre. In other words, Back In Black kicks like a mutha.”

Back In Black was an immediate hit. Within two weeks of its release, the album was at number one in the UK.

The first single, You Shook Me All Night Long, made the top 40 in the UK and US, and the top ten in Australia. By early October, when the band finished touring in North America, the album was certified platinum in the US as it began an incredible thirteen-month residency in the Billboard top ten. At one point it was selling 10,000 copies a day.

Brian Johnson had been anxious before his first gig with the band in Belgium, one month before the album was released. According to Angus, “He was sh*tting himself!” But his fears had evaporated when he saw a banner held up in the audience: ‘R.I.P. Bon Scott, Good Luck Brian.’ “It just lifted me,” Brian said.

An even greater tribute followed when AC/DC returned home to Australia at the end of the Back In Black tour in February 1981. After their gig in Sydney, Bon Scott’s mother Isa told Brian, “Our Bon would have been proud of you, son.”

40 years on, Back In Black is still the benchmark for hard rock. As Rage Against The Machine guitarist Tom Morello said, unequivocally, no matter how good the newest rock or album is, “Back In Black will kick its ass.”

What AC/DC created, in the wake of tragedy, was as near to perfect as any rock album could be: ten tracks of electrifying rock ’n’ roll, all killer, no filler. Brian Johnson delivered, on debut, the performance of a lifetime.

In Phil Rudd and bassist Cliff Williams, there was the best rhythm section in the business, no frills, no fancy stuff , just driving it home. And at the heart of it all was the guitar power of Malcolm and Angus Young: Malcolm, wielding his Gretsch, all about the rhythm, a master of riffs; Angus, with his Gibson SG, playing off Mal, and conjuring up one killer solo after another.

In 1980, Back In Black was a triumph not just for Brian Johnson and AC/DC but for rock music, period. As Tom Morello recalled: “Disco was huge and punk and new wave were ascendant, and along came this AC/DC record which just destroyed everybody. It put hard rock music back on the throne, where it belongs!”

And as Slash saw it: “Back In Black saved rock ’n’ roll! It was the defining rock record that came during the biggest lull for rock music. It just exploded!”

Slash was just a kid of fifteen when he first heard Back In Black, and as he said of its impact: “AC/DC was always a great band, totally genuine. But the miracle of the whole thing was that Back In Black was just a great new record, it was still AC/DC. We all missed Bon, but we let him go and at the same time welcomed and embraced Brian.”

In 1978, the NME writer Nick Kent described Thin Lizzy’s Live And Dangerous as “an album made by heroes.” So, in the truest sense, was Back In Black. As Malcolm Young once said of AC/DC’s music, in which Chuck Berry was a primary influence: “It’s just loud rock ’n’ roll - wham, bam, thank you ma’am!”

But there was something else in Back In Black, something deeper, and it was Malcolm, again, who defined it most clearly. “We meant it,” he said. “It’s real. It’s coming from within.

"That’s how that album was made - because of what we’d all gone through. And that emotion on that record – that will be around forever.”