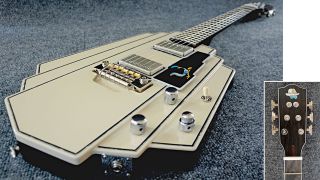 Buzz Feiten is probably best known for his popular Feiten Tuning System, a pioneering setup that many fans believe improves a guitar’s tuning and intonation. And then there’s his hardware, which can be found on many quality guitar builders’ models. Feiten recently trademarked the term “Future Vintage,” which encapsulates his core mission — to take the best from the great instruments from the Fifties to the Seventies, add his own innovations and produce an instrument of the highest functional and aesthetic quality.

Last year the late Bo Diddley’s long-time musical partner, Frank Davenport, met with Feiten to discuss the notion of building a fitting tribute axe for Bo, a legendary pioneer of leftfield guitars. The goal was simple: to design a guitar Bo would be proud to play if he were still here today. Feiten succeeded, building a guitar with a distinctive body shape and high-spec hardware that Diddley surely would’ve dug.

“I wanted to do something that would stand the test of time, not some kind of a novelty, kitsch kind of piece,” Feiten says. “I started thinking about Art Deco architecture and shapes. I thought the Chrysler Building shape — if maybe you turned it upside down — would make a good starting point. I still had to play around with the logistics concerning playability and upper fret access.” When I suggested the axe looks like something Diddley would’ve created himself, Feiten agreed. “Yeah, it’s just weird enough!”

In terms of tonal considerations: “My first thought was to make sure it would sound great acoustically. I used a great Schaller bridge that I customized, and I incorporated some of the ideas I use on my SuperNova range of guitars, including rear mounting the pickups, which gives fantastic sustain."

The roadrunner design on the pickguard was added at Davenport’s suggestion. “The roadrunner had become a mascot for Bo; he often had stickers with it on his guitars. Rather than a sticker, I had it inlaid in mother-of-pearl, turquoise and honey jasper, the same material that’s on the custom Bo headstock logo I designed.”

The first Bo Diddley model has already been snapped up by Joe Walsh. Production is expected to generate models at varying price points, with the finery adapted accordingly. It’s definitely a dream guitar for anyone — let alone fans of the Diddley Daddy — and serves as a perfect shop window for Feiten’s Future Vintage concept.

For more, check out buzzfeitenofficial.com.