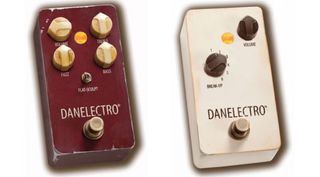 Danelectro has unveiled its new Eisenhower Fuzz and The Breakdown overdrive pedals.

The first two of a promised line of vintage pedals, the Eisenhower Fuzz and Breakdown both feature silent true bypass switching.

The Eisenhower Fuzz is said to be based on "one of the greatest octave fuzz pedals ever," but adds gain and EQ controls to the mix. The pedal also features a flat-sculpt toggle for the purpose of adding bass and dropping mids.

The Breakdown features a six-position selector that attenuates the input to the pedal. The first three are designed to be constantly left on, while the latter three hit the input of the amp hard for break-up tones.

The Danelectro Eisenhower Fuzz and The Breakdown overdrive are available now for $149 apiece.

For more info on the pedals, head on over to danelectro.com.