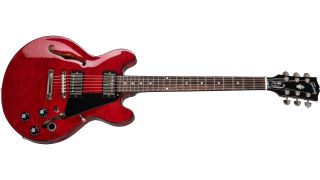 The guitar—which will be produced in a limited run of 150 models, 50 of which will be signed by Jett herself—features hand-wired Orange Drop capacitors paired with Gibson Burstbucker 2 and Burstbucker 3 humbucking pickups. Additionally, in a first for an ES-series model, the guitar features a thermally-engineered chambered maple centerblock plus thermally-engineered Adirondack Spruce bracing.

For more info on the guitar, head on over to gibson.com.