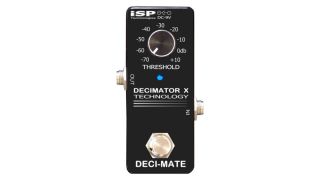 ISP Technologies has introduced the new Deci-Mate, a downsized version of its popular Decimator noise suppressor circuit that is housed in a small, micro-pedal package.

The Deci-Mate promises new tracking improvements over existing Decimators, with an adaptive response that can cope with staccato playing and sustained notes.

A single threshold knob controls the level of noise reduction, which, according to ISP, is all that is required—its algorithm aims to do away with any release control.

The Deci-Mate is available beginning in October.

For more information, head over to ISP Technologies.