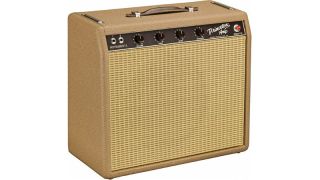 There is little doubt the Fender Princeton is a coveted amp. “But which one?!? Tweed? Blackface? Silverface?” All of them, my friends, all of them.

That said, the one serendipitous electric-powered wallflower that often gets overlooked is the Brown-era Princeton amp, which was produced from ’61 to ’63. Hell, even Grammy-winning country artist Chris Stapleton sheepishly admitted he found his ’62 Princeton - the one this Princeton is based on - gathering dust in the corner of a music store.

“So, what’s so special about this reissue, then?” Everything, my friends, everything. For starters, this slightly modified Fender ’62 Princeton Chris Stapleton Edition is the first Brown-era hand-wired reissue Fender has made, and even without reverb, its sound is as smooth as Tennessee whiskey - if you don’t mind the double entendre.

Stapleton’s original has a speaker swap, so the first noticeable mod on the ’62 Princeton is the inclusion of an Eminence 12–inch Special Design 'CS' speaker in place of a stock 10-inch speaker found in vintage ones.

With just volume, tone, speed and intensity for controls, there’s little room for fiddling with this ’62 Princeton.

The bigger speaker clearly adds more body to enhance its musical midrange and crumbly overdriven snarl when the volume is pushed. The tube tremolo oscillates in such an organic and dimensional manner that it almost acts like reverb, adding depth.

It’s not a cheap amp, but neither are the vintage ones, and Stapleton requested all artist royalties from this amp be donated to his charity, Outlaw State of Kind. I've gotta say, that’s pretty cool.