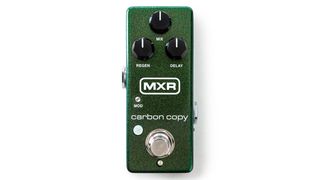 Mini pedals are all the rage, and most likely, some engineer somewhere is transforming your favorite life-sized pedal into a diminutive version with all the same bells and whistles. It goes without saying that it was only a matter of time before MXR would take their most popular and best-selling analog delay pedal, the Carbon Copy, and shrink it down into the space-saving MXR Carbon Copy Mini Analog Delay without compromising any of the original’s plush and dark-sounding repeats. But even better, they’ve managed to incorporate a Bright voicing switch, which adds articulated sparkle and definition to the organic delay.

So, if you’re like me, you can now grab a couple of these Carbon Copy Minis to occupy the solitary space left behind from the original on your pedalboard for even more versatility and warm analog delay wash - because two is better than one, amirite?

Outside of the mini-housing, the Carbon Copy Mini Analog Delay is nearly identical to its Carbon Copy big brother with a bucket-brigade circuit, an all-analog signal path and 600ms of delay time. It also has the same green-sparkle finish, rugged footswitch, top-mounted controls for Regen, Mix and Delay and Mod (Modulation) on/off switch with orange LED.

What’s new is the aforementioned Bright voicing (accessed by a recessed switch on the side of the pedal and indicated by a bright-blue LED) that accentuates the high-end frequencies, similar to the Carbon Copy Bright Delay for enhanced presence and clarity. There are also two internal trim pots to adjust the Speed and Width of the modulation so you can set-and-forget the type of warbly echo or drippy chorused-vibrato you wish to hear in the CC Mini’s repeats. The CC Mini is true bypass, powered only via a 9-volt DC adapter.

There’s no need to overthink the CC Mini. It’s exactly the same pedal as its sparkly green predecessor, but with the added versatility of featuring a Bright switch to engage a more defined and clearer-toned echo. It has all the lovely analog warmth in its cloud-soft repeats that breathe dimension to your guitar tone, especially in the Bright voicing. In its original mode, the CC Mini mimics the darkly textured repeats of the Carbon Copy, which many players love - includuing myself - that adds a shroud of ambience to solos and pick chug.

Engaging the Mod switch is more or less the icing on the chorusy cake. It sounds wonderfully thick and shimmery if you’re going for density in sound. The only thing that takes getting used to are the smaller knobs where I needed to be more precise in setting up the delay time and repeats because the taper on the pots are tightly wound - which is not a bad thing - but once you have set your controls, they’re not moving.

The CC Mini is unparalleled if I need to nail that wide slapback echo that brings my guitar to life in a honky-tonk, or whether I’m sailing on cascading waves of wet delay that spills over on each note - and that’s why I’ll be bringing two of these CC Minis with me every time.

● The CC Mini has a recessed, side-mounted Bright switch to activate the upper frequencies for more sparkle and clarity in its analog repeats.
● The Mod Switch can inject warbly vibrato and chorus to the delay, adding a chewier texture for the echoes.

THE BOTTOM LINE: The MXR Carbon Copy Mini Analog Delay, now as a mini-pedal, remains intact as a sonic beast of an analog delay with built-in modulation, 600ms of warm delay and a bright voicing.