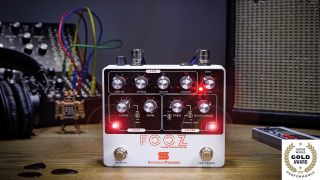 Back in the late Sixties and early Seventies, when synthesizer technology was in its infancy and the electric guitar was in its adolescence, several ambitious products like the EMS Synthi Hi-Fli, Ludwig Phase II and Maestro USS-1, among a few others, attempted to merge synth-like sounds with the expressive freedom of the electric guitar. Basically, these devices were early multi-effects processors that combined effects like fuzz, filters and modulation in a single box to generate various unusual sounds that were more electronic than electric. As synth technology progressed, this approach was quickly forgotten, particularly since the earliest guitar synthesizer effects were quite outrageously expensive.

Fortunately for those of us who love unusual effects and textures, several pedal designers have revisited these designs to offer players cool and unusual electronic sounds that still retain plenty of the electric guitar’s character. The Seymour Duncan Fooz is the latest entry into this growing category, offering a brilliant combination of fuzz, filter/envelope follower and LFO (low-frequency oscillation) effects that generate an impressive variety of analog synthesizer tones in addition to classic fuzz and envelope follower effects. For adventurous players looking for new tonal avenues to explore, Fooz is a cure for your blues.

FEATURES The Fooz pedal’s top panel is divided into separate Fuzz, Filter and LFO sections that will look familiar to experienced synth programmers but aren’t totally foreign to more advanced pedal pushers and effects geeks either. The Fuzz section offers standard level and gain controls plus an on/off switch for using the LFO section for tremolo effects (on) or to modulate the Filter section (off). The Filter section provides frequency and resonance controls as well as a switch for selecting band-pass or low-pass filtering (or off) and another switch for modulating the filter with the LFO or engaging the envelope follower (or off). The LFO section has controls for depth, speed, wave and shape, and if the Filter’s Control Type switch is set to “ENV” a sensitivity control is engaged for the adjusting of the envelope follower’s dynamic response.

PERFORMANCE Even if you aren’t familiar with synthesizer programming, it’s very easy to dial in cool electronic textures after familiarizing yourself with the controls' functions. The Fuzz section can be used on its own and sounds quite good that way, but face it — you didn’t spend the extra bucks just for distortion. The Filter section absolutely rocks, producing funky and familiar Mutron III-style textures but also going well beyond that in both frequency range and depth of the filter sweeps. The LFO section is very versatile, and anyone who has used a more advanced tremolo will immediately figure out how to use it effectively.

You don’t have to be an experimental tone destroyer to love Fooz. While it’s capable of creating rich, dramatic envelope follower/synth tones reminiscent of the rare and desirable Lovetone Meatball (and well beyond that), it can also dial in some wonderfully understated but expressive voice-like auto-wah/filter tones that respond dynamically to your playing. Fooz can add new life to your solos or take you to sonic worlds you’ve never experienced before.

● The Filter section can be set for modulating the filter with the LFO section or to engage a dynamic envelope follower effect.
● Eight Dip switches on the back of the unit allow users to customize envelope and expression pedal control functions.
● THE BOTTOM LINE The Seymour Duncan Fooz Analog Fuzz Synthesizer revives early guitar synth technology by combining fuzz, filter and LFO processing in a single unit while offering the advantage of modern sound quality and reliability.