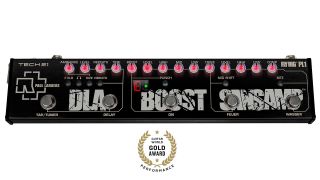 Rammstein are one of the world’s most successful touring acts today, regularly selling out stadiums in Europe and arenas in major cities across the United States. The band’s guitarists, Paul Landers and Richard Kruspe, both have the money and manpower to use any rig they want, so there’s something wickedly ironic and rebellious about Landers’ choice to collaborate with Tech 21 on a signature version of one of the smallest rigs known to guitar-kind: the Fly Rig (especially since his bandmate Kruspe uses a rig big enough to fill an entire semi-trailer all by itself ).

The Tech 21 Paul Landers PL1 Signature Fly Rig may be small and light enough to slip into the front pocket of a pair of lederhosen, but it provides an impressive variety of killer sounds and effects. Its two Sans-Amp channels are uniquely voiced to Landers’ specifications, and it also includes vibrato and ambience effects (in addition to delay), a boost function, tuner, XLR output and several other features not found on Tech 21’s other Fly Rig products. The Paul Landers PL1 Fly Rig is designed to be everything a guitarist needs to perform on stage or record in the studio, with the exception of a guitar and cables.

FEATURES Measuring only about 12 ½ inches long, 2 ½ inches wide and 1 inch tall, the Paul Landers Fly Rig is compact even compared to most multi-effects units available today. Five clickless pro-quality footswitches are arranged along the lower edge, with function switches in the middle and 14 illuminated control knobs along the top surface. There’s also a display for the tuner function located about dead center. The ¼-inch input and output jacks are located on the back along with a center-negative jack for the included 9-volt power supply, and a male XLR jack is located on the left side.

Most of the controls are dedicated to the Wasser (“water” or clean) and Feuer (“fire” or distortion) channels, which each have their own separate EQ (high and low for Wasser, high, mid and low for Feuer) and level controls. The Wasser channel also includes a compressor knob and a Bite (bright) switch, while the Feuer channel features a Drive (gain) knob and Mid Shift switch. Separate footswitches for each channel allow uses to select either the Wasser or Feuer channel (but not both at once), or bypass the PL1.

The Boost function features its own footswitch, level control with a range of +6 to -10dB and Punch switch that boosts midrange. Next is the Delay (vintage tape echo) section, which also has its own footswitch, level, repeats and time knobs and Ambience control with Size (close mic/room) switch. The Vibrato switch changes the delay to a vibrato effect with speed and depth controls. The Tap/Tuner footswitch provides a tap tempo function for the delay and vibrato effects or engages the chromatic tuner when it’s held down for a couple of seconds. A headphone switch boosts the output level for headphones, and the XLR ground lift switch eliminates hum problems when connecting to an external mixer.

PERFORMANCE The sound of the Paul Landers Fly Rig is simply phenomenal.

While Landers specializes in ultra-clean and dense distorted tones for Rammstein’s brand of industrial metal, the PL1 can do much more, including blues overdrive, classic rock and even aggressive modern country tones. The unit sounds best connected direct to a mixing console/recorder or plugged into the return of an amp’s effects loop. Both EQ sections provide an impressively wide range that requires careful tweaking to find the sound you want, but rest assured it’s probably there. The Boost punches solos up to the front of the mix; the Delay sounds spacious and warm; and the Vibrato effects are thick, chewy and trippy.

THE BOTTOM LINE The Tech 21 Paul Landers PL1 Signature Fly Rig is truly a professional-quality amp and effects rig for the stage and studio that delivers a massive variety of awesome expressive, responsive tones and fits into a guitar case