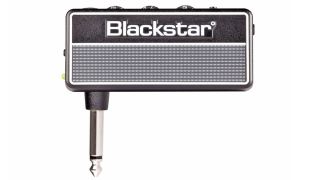 Does anyone use a headphone guitar amplifier anymore? Like, shouldn’t you use an app for that, Grandpa? But what do I know? I haven’t used one in a while, so I’m not on top of the latest gadgetry in this department.

After receiving the new Blackstar amPlug2 FLY Guitar though, I must loudly proclaim that this tiny plastic wonder contains electric guitar amp tones and onboard effects that sound so crisp and full, you’ll want to use it for recording, much less practicing or jamming all night.

The Blackstar amPlug2 FLY Guitar is discreetly designed, with an attached foldable guitar input jack that can be rotated 180 degrees for easy access to the controls while remaining unobtrusive. The amPlug2 FLY has three selectable channels accessed by tapping the power button and indicated by color LED: Clean (green), Crunch (orange) and Lead (red).

It also features three rotary controls for volume, gain and ISF (a tone-shaping control that sweeps the midrange for more American or British amp characteristics), headphone and aux inputs, and an FX button (with selectable chorus, delay and reverb for any channel.) The unit is powered by two AAA batteries and can run up to 17 hours, and will shut off automatically if it’s idle after 30 minutes.

Just on the Clean channel alone, I’d want the Blackstar amPlug2 FLY Guitar. Between sweeping the gain and ISF controls, I was able to dial in slightly compressed sparkle or almost tube-like breakup. The Crunch channel is my favorite, and has all the requisite shades of a classic amp stack’s bark to metal grind with molten mids.

Lead has more compressed and juiced gain with pointed mids, and adding the onboard delay makes solos sound like they’re off a record. I will say the effects add depth, even though they are pushed toward maximum wetness, but that’s a minor quibble.

Truth be told, I’ve come around to using the Blackstar amPlug2 FLY Guitar more often because no app can match its unrivaled tube-tone in a headphone amp, so go ahead and call me 'Gramps.'