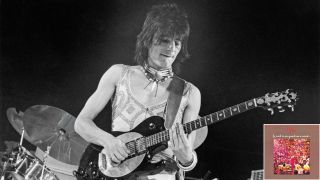 One of the raunchiest guitar tones of all time, Ron Wood’s rhythm track on the Faces’ classic “Stay with Me” is a great example of how a relatively simple rig can be so much more than the sum of its parts. In essence, Wood used just a guitar and an amp, but his signature tone has eluded imitators and befuddled tone geeks for decades.

The guitar Wood used on the song is no mystery: a Zemaitis “disc-front” solidbody that Tony Zemaitis custom built for him in the early Seventies and that Wood calls the “Stay with Me” guitar for obvious reasons. Equipped with three Gibson PAF humbuckers, each with its own volume and tone controls and individual push switches that enabled any conceivable combination of the three pickups, the Zemaitis also features a distinctive circular aluminum “scratch plate” that enhances the guitar’s natural resonance.

But perhaps the most important feature of the disc-front Zemaitis when it comes to decoding this song’s guitar tone is its built-in battery-powered booster, which is engaged by pulling up the master volume control on the upper bout. The circuit is a mystery, but considering its timeframe it’s likely based on a germanium transistor treble booster — the distinctive midrange growl it produces certainly suggests that.

The bigger mystery is the amp that Wood used. Fortunately, Wood revealed that exact detail in the November/December 2015 issue of Guitar Aficionado where he emphatically stated it was a Hiwatt. Although tone snobs argue that an early Hiwatt’s tone is too clean, these amps can get quite nasty when pushed hard (check out the Who’s Live at the Isle of Wight Festival or Led Zeppelin at the Royal Albert Hall) and the Zemaitis’ booster adds delicious rasp and grit that has fooled many into thinking Wood used a tweed amp. Having the guitar tuned to open E is the cherry on top, providing a generous amount of unison-note clang that makes the tone even more resonant.

TONE TIP: Wood’s rig is difficult to duplicate inexpensively, but a guitar with a PAF-style humbucker, something like the Menatone pedal that provides Hiwatt-style tones, and a Rangemaster-style treble booster like the Naga Viper will get you most of the way there. Use a slightly overdriven amp setting and let the pedals provide the grit.