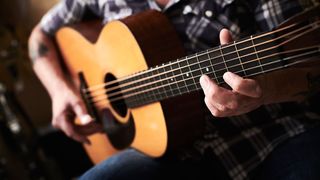 Songs with simpler chords - sometimes known as campfire guitar songs - are ideal for beginners who are still getting used to playing the guitar and transitioning between chords. Considering how important practice is to learn to play the electric or acoustic guitar, it’s a good idea to practice songs that you recognize and enjoy.

Below are 10 popular songs with chords a beginner can handle. You may be surprised to learn, with the right amount of practice, how quickly you can sing and play one of your favorite songs.

And if you need to brush up on your chords, we’ve got a comprehensive guide below the song list.

1. Frank Sinatra - Fly Me To The Moon

Fly Me to the Moon is a classic hit written by Bart Howard and originally titled In Other Words. Howard wrote the song in 1954, and Kaye Ballard made the first recording of it that same year.

But it was the smooth, soulful voice of Frank Sinatra in 1964 that made his recording of Fly Me to the Moon the classic we recognize today. Fun fact: Sinatra’s version of the song was closely associated with the Apollo moon missions.

Although the original uses some jazzier 7th and voicings, you can play and sing along to the song with standard major and minor chords, too.

Many artists have recorded their own versions of Can’t Help Falling in Love, but it was Elvis Presley who first recorded the song in 1961 for his album Blue Hawaii.

Can’t Help Falling in Love was written by Hugo Peretti, Luigi Creatore, and George David Weiss. Presley’s version topped the British charts in 1962 and reached number two on the US Billboard Hot 100.

This song revolves around standard open chord shapes, so it's a great song for beginners.

Hallelujah was written by Leonard Cohen, who originally recorded the song for his 1984 album Various Positions. The song didn’t see much success initially until John Cale recorded a version, which then inspired Jeff Buckley to record one of the most highly-regarded versions of Hallelujah.

Although Buckley arpeggiates the chords (ie, he plays each note of the chord individually), the progressions sound great strummed, too.

Wonderwall was written by the lead guitarist and main songwriter of the English rock band Oasis, Noel Gallagher. The song was included in the 1995 album (What’s the Story) Morning Glory? and was released as a single in October 1995. Wonderwall topped music charts in Australia and New Zealand and reached the top ten in Canada and the United States.

The song was certified quadruple platinum by the British Phonographic Industry and certified gold by the Recording Industry Association of America.

In this track, Noel Gallagher uses some clever chords that revolve around keeping your third and fourth fingers at the third fret on the B and high E strings.

You'll need to affix a capo on the second fret to play along to the original recording.

I’m Yours was released by Jason Mraz in 2005 and was included in his third album We Sing. We Dance. We Steal Things. in 2008.

It was nominated for Grammy Award for Song of the Year and Best Male Pop Vocal Performance at the Grammy awards in 2009. The song spent 76 weeks on the US Billboard Hot 100 and is one of the best-selling digital songs of all time in the US.

With just a handful of open position chords, this is one of the best campfire songs to wheel out over the summer.

Creep is a song released by British alternative rock band Radiohead, as their debut single in 1992. Creep was included in their first album Pablo Honey and became an international hit after being rereleased in 1993.

Because Radiohead took pieces of the 1972 song The Air That I Breathe to produce Creep, Albert Hammond and Mike Hazlewood have been credited as co-writers.

Just four chords will get you through this '90s alt-rock classic, but you'll need to brush up on your barre chords, so it's best tackled once you've mastered basic open-position shapes.

All I Want is a song by Dublin-based alternative rock quartet Kodaline. It was recorded in 2012 and was included in their 2013 album In A Perfect World. It reached fifteenth on the Irish Singles Chart and reached number 67 on the UK Single Chart.

All I Want got even more attention when it was featured in the movie The Fault in Our Stars and the E! TV show The Royals.

Again, this is composed primarily of open-position chords, but you'll need to figure out the best way to play the tricky-to-learn F chord.

Bohemian Rhapsody was written by Freddie Mercury for the British rock band Queen’s 1975 album A Night at the Opera. Bohemian Rhapsody topped the UK Singles Chart for nine weeks and sold more than a million copies by the end of January 1976. When the same version was re-released in 1991 after Mercury’s death, it spent another five weeks at number one.

This is one of the more challenging songs on this list, and requires a knowledge of barre chords to get through.

Hey Jude was written by Paul McCartney and released on August 1968. It shot to the top of music charts across the globe and became the top-selling single of 1968 in the UK, Australia, Canada, and the US. Hey Jude spent nine weeks at number one on the Billboard Hot 100.

Over eight million copies of Hey Jude have been sold. In 2013, Billboard magazine named Hey Jude the 10th 'biggest' song in history, according to chart success.

McCartney's use of chords was always inventive, but you can easily strip this one back to standard shapes, as long as you can handle the Bb and F chords.

When We Were Young is a song by British singer-songwriter Adele, who co-wrote the song with Tobias Jesso Jr. It was recorded in 2015 and released on January 22, 2016, as the second single from Adele’s third album, 25.

This is one of the easier songs on this list, and another great one to wheel out at the campfire!

Beginner chords you need to learn

There are eight essential chords every beginner guitarist should focus on learning: C, A, G, E, D, A minor, D minor, and E minor.

Many beginners find it easier to remember the first five basic guitar chords by memorizing the word CAGED.

As you learn each chord, pay attention to how the shape looks and feels. You will likely find it much easier to memorize that than the details of where to place your fingers.

It’s also worth noting that as you learn the basic guitar chords, you may find yourself slowly placing each finger on the guitar, one at a time. But as you become more comfortable with the chords and develop muscle memory from playing them, your movements will become more natural.

Eventually, you will be able to go right into a chord without thinking too hard about it. Also, if you’ve never played guitar before, check out Guitarsumo’s guide on beginner guitars. All right, let’s dive into the fun stuff.

What are chord charts?

Let’s assume that you’re a complete beginner for the sake of this topic. Considering chords are the foundation of music, it’s essential to understand them. A big part of having a complete understanding of guitar chords is learning how to read them.

To an average person, a guitar chords chart probably looks like nothing more than a combination of dots, lines, and numbers. But once you develop an understanding of how to read them, a chord chart becomes a useful tool for making music.

Imagine you are looking head-on at a guitar as it stands vertically. The vertical lines of a chord chart represent the strings of the guitar. In standard tuning, the strings from left to right are low E (sixth string), A (fifth string), D (fourth string), G (third string), B (second string), and high E (first string).

The dots on the chart show you where to place the fingers of your fretting hand. Each finger is assigned a number:

The A major chord, commonly called the A chord, can be a bit tough for beginners because all three fingers are placed on the second fret on adjacent strings. To properly play the A chord, make sure you curl your ring finger to allow the open first string to sound clear.

The C major chord, commonly called the C chord, is typically the first chord a guitarist will learn. It’s also a great chord to see if you are using the tips of your fingers as you should. The posture of your fretting hand has a major impact on the sound of the chord.

D major is a slightly more difficult chord, particularly for beginners. It requires you to place your fingers close together, in a small area, without accidentally touching any other strings.

To play E major, put your pointer finger on the first fret of the third string.

Then put your middle finger on the second fret of the fifth string.

Finally, put your ring finger on the second fret of the fourth string. Strum every string.

G major is arguably the most challenging chord for a beginner because of the space between your fingers.

Unlike some of the other chords, G major requires your fingers to be pretty spread apart, which can feel awkward to beginners.

Finally, place your ring finger on the third fret of the first string.

Then, while pressing down with those fingers, strum every string without muting the open notes.

Finally, put your ring finger on the second fret of the third string. Strum every string except for the low E.

Finally, place your ring finger on the third fret of the second string. Strum every string except low E and A.

E minor is one of the simplest chords to play, even for beginners.

Things to remember when practicing chords