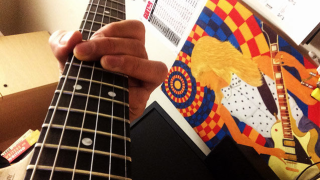 Song  structure is one of songwriting’s key elements or building blocks. As  songwriters, we casually throw common structuring language around all  the time—“Let’s double a chorus here. Why don’t we go to the bridge  there?” But how often (if ever) do we really stop to think, beginner or  advanced writer alike, about the nut-and-bolt concepts behind the  everyday rudiments of our trade?

For example, take the  “outro” section of a song. Sure, its purpose is to guide the listener to  song’s end, but how does it actually do that?

So what is an outro section?

Mark Bacino is a singer/songwriter based in New York City. When not crafting his own melodic brand of retro-pop, Mark can be found producing fellow artists, composing for television/advertising and teaching songwriting via his Queens English Recording Co. Mark also is the founder/curator of intro.verse.chorus, a website dedicated to exploring the art of songwriting. Visit Mark on Facebook or follow him on Twitter.