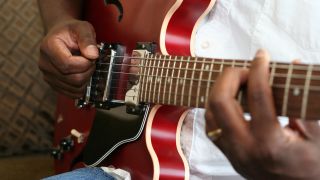 “Okay, what on Earth is chord tone soloing?”

Solos are usually accompanied by a set of chords called a progression. Each chord contains notes - these are the chord tones. In this situation, though, we’re going to play them individually (known as an ‘arpeggio’) and use them for soloing.

“Surely chords are chords? How do you use them in solos?”

Some guitarists like to map their lead lines - either by writing solos in advance or by being skilled improvisers - to these chords to give their playing a synergy with the rest of the music. The most effective way of doing this is to use the notes from the chords being played.

Chord tone soloing can get really complex, but don’t get bogged down in the theory at this stage; just aim to incorporate some notes from chords in your playing. If you know the chords in the music, you’re equipped with loads of notes that’ll work in a solo.

“If I’m not getting deep into the theory, what’s the point?”

If you base your leads on scales exclusively there’s a tendency to move around the scale by playing the next highest or lowest note - this quickly gets old and leaves your solos sounding like streams of notes that are the musical equivalent of repeatedly going up and down a ladder. Using chord tones automatically produces bigger jumps between notes (aka ‘intervals’) and can be a platform for some really creative ideas.

“That sounds interesting, where can I hear it in action?”

You can hear jazz pioneer Charlie Christian deftly playing over fast chord changes in the jaw-dropping Solo Flight. It doesn’t always have to be so technical, though. Slash’s main theme in Guns N’ Roses’ Estranged shows how chord tones’ bigger intervals can be used to create a catchy melody.

The first step is to get these new note combinations under your fingers. They will feel odd at first, especially when you have to move across strings on adjacent notes. The first tab exercise shows you the notes/tones from G, Am, Bm and C chords. Our second example shows how you can add a smattering of this new approach to a lead guitar lick.

These six chords are all from the same key (G major, as it happens), but they’re not bog-standard open shapes. Plotted across the highest strings and ascending the fretboard, they’re perfectly suited to wailing leads - once you start playing chord tones, anyway!

Step 1. Play each chord as a chord - just strum like any other chord, taking care to keep the idle strings quiet.

Step 2. Now think 'lead guitar', and play each note from each chord separately.

Start very slowly and gradually build up speed. Make sure none of the notes bleed into each other.

Play the scale a few times before attempting this melodic lick. This will help you get used to how the scale sits under your fingers.