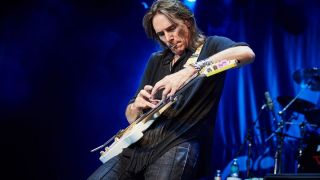 Pat Heath of BIMM Brighton brings you a fantastic selection of new licks to learn at easy, intermediate and advanced levels.

As ever, we're starting off easy with a thumb and fingerpicking chord exercise inspired by Monty Python's Eric Idle, and should you master that and remember always to look on the bright side of life, you might well be able to tackle example 6 – a tricksy Mixolydian/D7 arpeggio solo that exhibits all the freewheeling fun of Steve Vai's playing.

Sadly, we lost the Monty Python actor Terry Jones recently, so we’re celebrating his Python collaborator Eric Idle who wrote many songs for their films.

Work on the back-and-forth thumb and fingerpicking on one chord then change between C, F and G7, gradually working in the arpeggio on each.

Steve Cropper is known for his simple but effective parts from many of the Stax label recordings, as both a session guitarist and member of Booker T & The MG’s.

This lick uses a bass note with chord response, played with a pick and bringing in some 6th intervals with controlled slides.

My Chemical Romance stormed the airwaves in the early noughties with awesome pop-punk hits, and are still selling out huge venues in minutes.

This example in the style of guitarist Toro uses tight strumming on the power chords, and ascending octaves to turn the riff around.

A low-gain, valve amp sound with a bridge humbucker is best for replicating the sounds of the coolest guitar-wielding schoolboy on the planet.

Quarter-tone bends on the third string lead into a barre on the 5th fret moving down a pentatonic run that ends with some of Angus’s fast signature vibrato.

Alternate picking is the key technique when aiming to replicate this fusion legend’s playing.

Rake into the first note organising a three-notes-per-string shape into patterns of six notes over a beat of four. Be confident in the delivery and end on an open E5 chord voicing.

Steve’s quirky childlike personality is ever present on both his solo and band recordings.

This Mixolydian-based lick slides into a D7 dominant arpeggio and uses pull-offs on the first and second strings with quick-fire vibrato. Cheeky attitude is key here (not to mention a healthy dose of chops!).