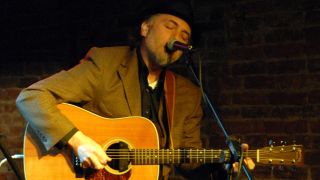 Welcome to our exploration of authentic Delta blues fingerstyle guitar. Once you've developed independence between your thumb and fingers, you'll want to take a look at adding an alternating bassline.

It is essential that you keep your foot tapping on the beat and concentrate on making sure your thumb stays in time whether you are playing just a single-note bass line or using the alternating bass guitar technique that’s crucial to this style.

One piece of advice that I took from Joe Pass a long time ago was that the bassline is always your most important concern. The bass provides a rhythmic foundation for the listener and ‘frames’ every melody note that you play. If the bass starts to get shaky then the whole structure will quickly collapse – it’s the cliché analogy of building a house on strong foundations.

You can find ‘greatest hits’ packages from these and many other acoustic blues masters such as Robert Johnson, Josh White, Son House and Big Bill Broonzy. Also check out modern players like Eric Bibb and Kelly Joe Phelps.

Most acoustic blues players in the early days used small bodied guitars, often parlour models, since 000, OM and dreadnought designs were new or not even invented.  Son House, Tampa Red and others used the powerful resonators of the age. Of course, any acoustic will do for this lesson – a cheap flat-top box may even sound the most authentic.

So, in order to build a strong and consistent bassline (in time and in balance, volume-wise), practice very slowly to start with and think about how any fretted bass notes need to coordinate with the melodic phrase. Gradually speed things up and you will find that the fingers naturally start to move together as one.

These first two lessons have been about programming your fingers and developing good coordination, so at the moment speed is a distant concern. The important thing is to always make sure your head is in control of what you’re playing, not your hands.

We’ll pick up where we left off on the last lesson, after having just added the alternating bass on the sixth and fifth strings, and begin by adding a very simple melody on the top string. Hold your first finger down on the 2nd fret throughout.

A slightly more challenging melody. Use your little fourth to play the fretted melody notes and focus on keeping the bassline smooth and in time.

This example builds on the previous one but adds a few faster notes. Keep the bass even and steady as you introduce these more intricate rhythms. Play through the example again, but this time, hold down a full Em7 chord. Even though you’re not playing the fretted notes, it’ll extend your technique.

The next example moves between two chords. Begin by playing the example without holding down the chords but when you gain confidence hold down the full chords as you play through the example.

Here’s a similar idea but the melody is now a little more complex. Notice that the eighth-note rest on the first beat helps to separate the melody. You might find that the trickiest thing is keeping control of the bassline - notice that two notes are played in succession on the fifth string.

Here the melody is the same as before, but I’ve now added another note to the bass part. Use your second finger to fret the low G note.

The following exercises are more like traditional licks, but help you to build independence between thumb and picking fingers.

I have simplified the bass to help you get used to these rhythms. You may wish to separate the melody and then introduce the bassline when you are comfortable.

The next two examples feature off-beat melody notes against an alternating bass line.

Remember, the key to sounding good is to keep that bassline rock solid against the picked melody notes.

The next two examples feature off-beat melody notes against an alternating bassline.

As you become comfortable with these ideas, experiment with the order of the melody notes to explore new melodic ideas.