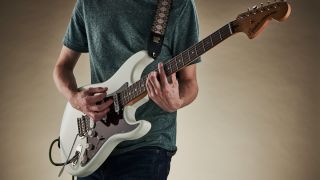 You’ve got a new beginner acoustic guitar or beginner electric guitar, or maybe your goal for the year is to dust off that guitar you’ve owned for years and finally learn to play. You’re raring to get going, but how do you play guitar?

Here, we guide you through everything you need to know: tuning the guitar, holding the guitar, playing chords, reading tab and even playing your first guitar solo.

Now, read on to take your first steps and learn how to play guitar. Happy playing!

You should tune up every time you play, so TG recommends using an electronic tuner. Hardware tuners start at about $5 and there are several free smartphone apps you can use, too.

Simply play an open string on your guitar - the tuner detects the note you’ve played and will show you whether the pitch of the string needs to be higher or lower.

All you have to remember is the order of the strings (fat to thin: EADGBE) so you know that you’re definitely tuning to the right note. Tighten the string with the string’s tuning nut to raise the pitch, or loosen it to lower the pitch.

You can also tune your guitar without a tuner so it’s in tune with itself. To tune the fifth (A) string, play the 5th fret of the sixth string and the open fifth string. These two notes should sound the same. Repeat this process for every string except the second (B) string, where you should tune to the 4th fret of the third (G) string.

Holding your guitar correctly will help you play better and avoid developing bad habits that will be hard to undo later.

The guitar should rest against your stomach or ribs. Go too low and you’ll struggle to reach round the neck, so adjust your guitar strap to find the right height for you.

Sit in a chair with your shoulders level, back straight and feet shoulder-width apart. Angle the neck slightly upwards so your fingers reach all the way round.

Believe it or not, learning a few basic chords means you can play hundreds of songs from the likes of Ed Sheeran to AC/DC and more, and are an essential ingredient in learning how to play guitar.

You understand chord boxes, now have a go at these easy major chords and check them against the audio examples below.

These minor chords have a sad, moody sound compared to major chords.

Learn the shapes and check them against the audio examples below.

Nail your fretting technique and make those chords ring out cleanly...

Play by the frets
Place your fingers as close to the frets as possible, but without being right on top of them.

Use your fingertips
Press down using the tips of your fingers. This stops you touching other strings and muting them out.

Check the strings
Play each note of the chord to make sure the strings ring out clearly. If they don’t, you may have to press harder or reposition your fingers.

A change like E to D requires a big movement for each finger to get from one chord to another. Practice the change repeatedly, focusing on keeping movements small.

Keeping your fingers anchored down on notes that are shared between two chords will save you moving fingers you don’t need to. The D and Dm chords have one note in common.

Some chords share identical finger patterns on different strings. Am to E, for example. Play Am then lift off, holding your fingers in the same shape as you move.

How to read tab

Once you know how music is written down you can follow tones more guitar lessons.

The group of six lines marked ‘TAB’ represents the guitar’s strings. The bottom line refers to the fattest string; the top line is for the thinnest string. The numbers tell you which fret to place your fingers at.

When numbers are stacked on top of each other you should play these notes together. This example shows three single notes followed by a D chord. Traditional notation appears above the tab and tells you how long notes should last. Don’t worry about this part for now - get started with just the tab.

The biggest part of nearly every song consists of playing chords, so a great strumming technique is essential.

Position your hand
Curl your fingers back into the palm of your hand with your thumb ready to grip.

Hold your pick
Place the pick on your index finger and place your thumb on the pick.

Fret a chord
You’ve learned some chords already, so choose one then press down firmly.

Strum the strings
Strum from the fattest string towards the thinnest. This is a downstroke.

This example features downstrokes using D and A chords. Strum lightly, making sure only the tip of your pick makes contact with the strings. If too much of your pick is showing it may snag in the strings. Remember to only strum the strings contained in each chord.

If you’re feeling comfortable with downstrokes you can try upstrokes. This exercise uses the same chords as the previous example, but there are upstrokes (marked V) in between the downstrokes. Aim for even, steady timing with every strum lasting the same amount of time.

The ‘one-four-five’ is one of the most common chord progressions in rock and pop. ‘One-four-five’ refers to the order of the chord names: A, D and E are the first, fourth and fifth chords in the sequence: A B C D E, and this is sometimes written as Roman numerals (I-IV-V). G, C and D are also a I-IV-V progression.

Don’t worry about the theory for now, just remember that the progression can be found in countless songs, including: The White Stripes' Hotel Yorba, Ramones' Blitzkrieg Bop, Led Zepellin's Rock And Roll, The Troggs' Wild Thing, and Jake Bugg's Lightning Bolt.

We’ve prepared a backing track that uses A-D-E-A chords so you can practice your first I-IV-V progression with the chords you’ve already learned.

Lead guitar isn’t just the impossibly fast stuff you see played by shredders on YouTube. In fact, the history of rock is littered with players famous for a sparser soloing style, such as David Gilmour, John Frusciante, Alex Turner and many more.

Lead guitar covers any kind of melody and is usually played one note at a time. The minor pentatonic scale is used as a basis for soloing by almost every guitarist in the world – so it’s the first scale you should learn. Although it has a technical name, it’s really easy to play. There are five different notes in it and the first note is repeated at a higher pitch - so you play six notes in total.

The idea with scales is to play the notes one after another, instead of all together, as you would with a chord. Use your second and third fingers, as shown by numbers. The notes from low to high are E, G, A, B and D.

Downstrokes
Picking single notes takes more precision than strumming chords. Hold your pick so only the tip is showing and pluck the string firmly with a downwards motion.

Small movements
Your pick shouldn’t travel far past the string. The less it moves the less distance you have to travel to pick the next note. This helps you play more accurately.

This simple lead guitar melody uses the E minor pentatonic scale you just played. Make sure you only play one string at a time and keep your pick motion quite small to avoid unwanted extra movement that will slow you down.