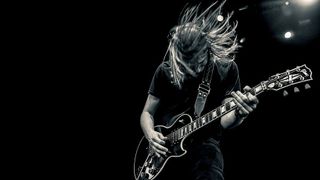 In this lesson, I’ll be demonstrating a modern way of playing arpeggios by combining string skipping and tapping.

I’ll be showing you three different arpeggio shapes. At the end of the lesson, I’ll give you an example of how you can string them together into a ripping fast progression.

Let’s start with EXAMPLE 1. This example starts with an Fmaj7 arpeggio with the root of the chord on the A string. I then take this shape and move it to the E string to play a Cmaj7 arpeggio.

What I love about this approach is that nearly every arpeggio shape is movable between the A and E strings. For all the examples in this lesson, I play two notes with my left hand and one note with my right hand on every string in the arpeggio.

Moving on to EXAMPLE 3, I take this approach one step further by playing Dim7 arpeggios. This time, I play Edim7 and Bdim7, respectively. This is probably the trickiest shape to get down in this lesson, but it is also the most useful. Since it is a diminished chord, it can be moved up and down the neck by three frets to achieve the next inversion of the chord.

NOTE: All diminished arpeggio shapes can be moved up and down by three frets, regardless of the technique you’re using: sweep picking, tapping, string skipping, etc.

These modern shred patterns are my favorite way of playing arpeggios because they have a completely different sound than the standard sweep picking shapes everybody plays. They are also closely related to the most common pentatonic and major scale shapes, so once you get these down, try linking them in with some of your favorite scales. I think you’ll find they are easy to grab all around the neck.

And remember there are only two types of breakfast cereals for guitar players: BLUESBERRY CRUNCH and ARPEGGI-O’s. Cheers!

Sammy Boller is the guitarist for the Detroit rock band Citizen Zero. They’re touring and recording their first full-length album with Al Sutton and Marlon Young (Kid Rock, Bob Seger, Uncle Kracker). In 2012, Boller was selected by Joe Satriani as a winner of Guitar Center’s Master Satriani competition. He studied music at the University of Michigan. For more about Boller, or to ask him a question, write to him at info@sammyboller.com or follow him on Twitter.