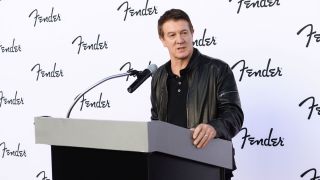 Contrary to oft-reported stories on the death of the electric guitar, sales have actually been on the rise over the past several years. And according to Andy Mooney, CEO for industry giants Fender, a full 45 percent of the guitars sold in a year by his company actually go to new players.

One problem? 90 percent of those beginners also abandoned the instrument within their first 12 months of playing.

"As an industry, we don’t have a problem attracting new entrants," Mooney told MusicRadar. “We have a member retention issue."

Mooney made the observation in a new interview that focused heavily on his company’s Fender Play and new Fender Songs services, which are aimed at changing how players begin learning on the instrument and also how they continue their journey and become more engaged with the instrument.

For Mooney, the Fender Play and Fender Songs services provide clear benefits to players - and, if those players continue on to become lifelong guitarists, to the industry as a whole.

"We did the math. The 10 percent of the salmon that make it through the dam have a lifetime value of $10,000 [each],” Mooney said. “They buy five to seven guitars, they buy multiple amps, they drive the hardware side of the business.

“We felt if we could reduce the abandonment rate by just 10 percent we could double the size of the industry," Mooney continued.

"[There are] a million new entrants in English speaking countries alone every year; only 100,000 of them commit. If you could reduce abandonment by 10 percent, that's an incremental 100,000 with an average lifetime value of $10,000. That’s an incremental billion dollar retail business every year."

As for those who do pick up the guitar, Mooney’s research also discovered that they're not all looking to be the next Jimmy Page or Eddie Van Halen.

“[W]e found 72 percent of people will pick up the instrument for no other reason other than to learn a new life skill,” Mooney said.

“So, not everybody wants to be standing with one foot on the monitor with the wind blowing through their hair. Most people would want to play quietly and solo in their own home, singing along with their favorite songs. And I think we have to embrace them alongside the really gifted virtuoso players that still exist out there.”

The CEO also highlighted the company’s increased focus on inclusivity, and the fact that it’s set to introduce more signature guitars for female artists next year than in its entire 70-year history.

For more of Mooney’s thoughts on the future of the guitar industry (thankfully, he’s optimistic), and Fender’s role in it, head over to MusicRadar.

Save 25% on Fender Play
Fender Play is one of the easiest and most affordable ways to learn to play guitar - and now it's even cheaper! Get 25% off a yearly subscription - normally $89.99, now just $67.49 - by entering the code TONE25 at checkout.View Deal