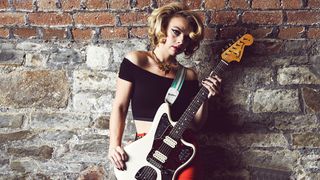 Could a Samantha Fish Jazzmaster be on the cards? (Image credit: Future)

Fender’s line-up of signature artists includes electric guitar players from a multitude of genres and backgrounds, yet there’s one thing nearly all of them have in common: a Y chromosome. But that’s all set to change in 2020, according to CEO Andy Mooney.

In a wide-ranging interview regarding Fender’s new Songs learning app, Guitar World asked Mooney how Fender is reaching out to female players, particularly following the company’s research that half of all new guitar buyers are female.

“That was a big ‘aha’ for us when we did the first research,” Mooney says.

“But part of why I think we didn't realize it and didn't have visibility to it was: a) women were opting more often to buy an acoustic guitar than an electric guitar for the first guitar, and b) they were more likely to buy online than in a traditional store. And I think we'd all agree that guitar stores can be intimidating venues for any beginner player. And even more so, I think, for women because of lack of female sales associates.

“So that insight fundamentally changed what we did in artist relations. And then product development from the point of view of developing signature guitars: we’ll introduce more signature guitars for female artists next year than we've done in our entire 70-year history in a very broad range of genres and personalities. So we're pretty excited.”

To our knowledge, producing just three signature models for female artists would exceed those built over the past seven decades, which have included the Bonnie Raitt Stratocaster, Avril Lavigne Squier Telecaster and Newporter acoustic, and the iconic Mary Kaye Stratocaster - although the latter has the accolade of being the first custom Strat ever produced, rather than a signature model.

A quick browse of Fender’s website reveals there are no signature models for female guitarists currently in production, and we can’t wait for that to change - anything that broadens the remit of the signature guitar is fantastic news for players of all genders.

We’ve suggested who we consider the most likely candidates for signature guitars and their associated models below - we’ve been waiting a while, so it’s a long list...

We’ll find out if any of them come to fruition in January, when NAMM fever hits once more.