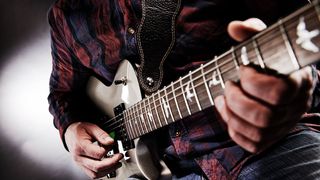 From a guitar perspective, one of the bright lights in these quarantine times has been the proliferation of famous artists, from Queen’s Brian May to Kiss’s Paul Stanley, showing how to play their own songs (not to mention groups of musicians getting together to jam on Rush and AC/DC tunes) on electric guitar.

But the YouTube guitar community has always loved demonstration and playthough videos, and an entire industry of content creators dedicated to producing educational clips on how to play various songs and styles has developed over the years.

Traditionally, content creators have argued that they’re covered by Fair Use laws when it comes to using small pieces of copyrighted music.

But copyright holders don’t always feel the same, and have targeted videos, and sometimes entire channels, for takedown.

During these times, when the posting of playthroughs, jams and instructionals has increased exponentially, so has the tension.

Now, YouTuber RodneyMcG, a musician and teacher who posts lessons and gear demos and reviews, has addressed the issue in a series of videos.

He starts out by discussing legendary bassist Leland Sklar, who, like many professional musicians, has been posting playalong and performance videos during the coronavirus pandemic.

According to McG, Sklar recently put up a song he had recorded and performed with James Taylor and it was taken down by the copyright holders and people representing James Taylor and his music.

But this video, McG argues, should be covered under Fair Use law. “It’s being used as education, and it’s being used to demonstrate and educate people – how he played a part, how it came to be and what he does when he performs it.”

Given this fact, McG asks if taking the video down is actually a violation of copyright law.

McG also notes that he once played a cover of his own songs for which he is the sole rights owner. “And I got a copyright strike, apparently from myself,” he says.

He wound up having to take down the clip.

While most situations, of course, do not involve a musician showing how to play a song he or she was actively involved in writing or recording, the takedown issue, McG says, “has happened to huge creators on down to smaller channels.”

In addition, he argues that trying to get around this issue has led to a decrease in the quality of educational videos, with content creators trying to manipulate the sound to the point where it's "almost pointless by having to do so much damage to the sound, trying to get around the algorithms that ID this content so that they can teach and try and educate music consumers and musical artists."

So where does this leave us, in McG's estimation?

“What it means for a lot of content creators is they could put years into developing a channel that could very easily in one fell swoop get completely taken down because of an automated algorithm that, most of the time, can catch one of your videos before you’ve even published it.”

He also notes that while there is an arbitration system by which content creators can appeal these copyright strikes and takedowns, “if you go to appeal the first thing that happens is you are warned by appealing that you may be in danger of having your channel taken down.

“Talk about a deterrent,” he says.

McG argues that the only entities benefitting from this system are rights managements groups who monetize the videos by placing ads and taking revenues. “They don’t have to do any work on behalf of an artist,” he says. “They just have this farm of content creators out there creating hours of hours of content for them to monetize.

He continues, “Most of the people I know that are doing content like this, we’re not getting rich off it and we’re not in it for that. But it is pretty insulting knowing that somebody else is monetizing something for something you’re perfectly legally allowed to do.”

“It’s going to drive [people] to other platforms,” he says. “And then everybody loses.”

The only solution, McG concludes, is “for people in the audience and content consumers to start really expressing to YouTube how important this content is and that a better solution needs to be found.

“I encourage you, if you’re getting a lot of these lessons, these great shows, please start making your voice heard. Please start addressing YouTube, because really you’re the ones with the most important voice.”

McG stresses, “I’m not here to bash YouTube. I’m putting this out because I’m hoping that we can preserve the platform and maybe come to some kind of reasonable solution to all of this.”