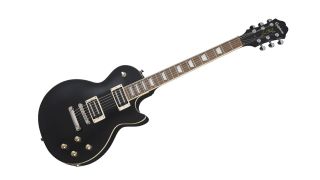 Epiphone has rolled out plenty of impressive signature electric guitars this year, but the company may have topped itself with the release of the highly-anticipated Vivian Campbell 'Holy Diver' Les Paul Outfit.

The limited edition model is based on the guitar Campbell played on the classic Dio albums Holy Diver and The Last in Line – originally a wine red Les Paul Deluxe he purchased in Belfast as a teenager and then sanded down and had painted matte black.

The Holy Diver Les Paul, similar to the original, features a mahogany body with maple cap and is finished in a black aged gloss with single-layer cream binding.

Electronics are headlined by two DiMarzio X2N humbuckers – the same pickups that were in Campbell’s original guitar during his Dio days – as well as brass volume and tone knobs and a three-way toggle switch.

The guitar is topped by a small-sloped dovewing headstock with a traditional Les Paul signature and a Sixties-era Epiphone logo.

“We tried to make it as close as possible to how this guitar was circa 1982,” Campbell says of the 'Holy Diver' in the accompanying video – and that includes having his original model’s serial number, 72987537, stamped on the back along with each new Epiphone’s own “grown-up serial number,” as he puts it.

The Vivian Campbell Holy Diver Les Paul Outfit comes with an EpiLite case and a Certificate of Authenticity.

For more information, head to Epiphone.