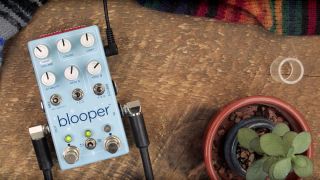 Chase Bliss Audio first unveiled a prototype of its Blooper effect pedal – a stereo looper pedal unit that allows the user to do all manner of wild modifications to the sampled audio – back at the January Winter NAMM show.

Since then, the pedal, which the company is designing in conjunciton with Knobs and 3 Degrees Audio, has undergone rounds of revisions and modifications, which Chase Audio has been documenting in a ridiculously entertaining YouTube series titled “Blooper Reel.”

Apparently we’re not the only ones who have been enjoying the pedal’s progress from, in Chase Audio’s words, a “prototype just kind of sucked” to the rather amazing unit it is today – the Kickstarter page that Chase Audio launched with an initial goal of $100,000 is now up to over $216,000, with almost a month left to go. Not bad for a rather niche, if admittedly incredibly cool, effect.

As for what the Blooper is actually capable of?

There’s also normal, additive and one-shot sampling modes, Full MIDI implementation, a repeats knob for fading loops or to use blooper like a tap-tempo delay and CV clock sync and modulation control.

Further capabilities include stability control, with the ability to introduce optional tape and warble effects to a loop, ramping and expression control and plenty of DIP switches for all sorts of deeper sonic customization.

All of which is to say that, unlike other looping pedals, with the Blooper the actual creating of the loop is not the endgame, but rather just where the fun begins.

You can keep up to date on the pedal’s progress here.