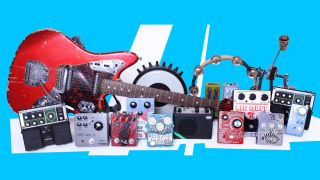 Brooklyn-based effects pedal company Death By Audio has teamed up with non-profit GetUsPPE to sell donated gear from acts including Wilco, the Flaming Lips, Queens of the Stone Age in an effort to raise money for Personal Protective Equipment (PPE) for healthcare and frontline workers battling COVID-19.

The pop-up shop Protection By Audio will be hosted on Reverb and features autographed gear, hand-drawn one-offs and pieces of musical history. Other acts involved include IDLES, Spoon, the Black Angels, Spacemen 3, Thee Oh Sees, A Place to Bury Strangers, Xiu Xiu, METZ, the Melvins, That Dog, the Voidz, Into It.Over It and This Will Destroy You.

Death By Audio will also be donating rare and never-been-seen prototypes.

Among the many items up for sale include a DBA Reverberation Machine hand-drawn by Wilco’s Nels Cline, DBA and A Place to Bury Strangers’ Oliver Ackermann's red Fender Jaguar, a DBA Flaming Lips Space Ring pedal signed by Wayne Coyne and Steven Drozd and an EQD Bit Commander, Dr. No Octofuzz and KHDK Scuzz Box, all owned and signed by Queens of the Stone Age’s Troy Van Leeuwen.

There are also DBA prototype pedals including a Total Sonic Annihilation 2 and Space Bass Custom one-off.

All proceeds from the popup shop will go directly to GetUsPPE, a volunteer-driven organization started by emergency department physicians in March 2020 as a solution to the PPE crisis among healthcare workers

Protection By Audio started when Death By Audio partners Oliver Ackermann and Heather Bickford were quarantined in their Brooklyn apartment, having recently recovered from the virus.

“After hearing the struggles and traumas experienced by those working on the frontlines, we knew we had to do something to help,” said Bickford.

"We brainstormed a bunch of ideas and then it dawned on us that we have a lot of friends in the music industry and that a lot of them would be down to help.”

To check out the Protection By Audio pop-up shop, head to Reverb.com.