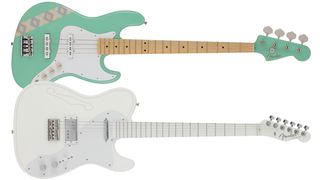 With Fender CEO Andy Mooney’s recent tease that the company is set to introduce more signature guitars for female artists next year than in its entire 70-year history, speculation has been rife about who’s in line for their own custom electric guitar - but Fender Japan has jumped ahead of the USA’s 2020 launches with a pair of signature models for J-pop-rock staples Silent Siren.

Lead vocalist and guitarist Sumire Yoshida has secured an especially striking Telecaster, equipped with an all-white finish that goes right across the fretboard and headstock, and even a painted-on F-hole.

HS-configured Teles are surprisingly rare, so we’re pleased to see Yoshida opts for the Shawbucker bridge humbucker and vintage Tele single coil in the neck, all fitted to an alder body.

Pickups include a pair of V-Mod Jazz Bass single coils, while there’s a maple neck and fingerboard, HiMass Vintage bridge and alder body.

Both clock in at ￥112,500, which is around $1,000. Sadly, they’re only available in Japan right now - with legendary guitar mecca Ikebe Gakki the most prominent retailer - but boy, we’d love to see that Tele in the States.

Fender Japan is no stranger to signature models for female artists, of course, with all-female Japanese rockers Scandal securing a signature Telecaster, Stratocaster and P-Bass back in 2017.

We’ll have to wait until NAMM to see who’s next in line for a Fender signature model, but we’ve already been taking our best guess.