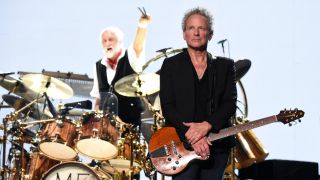 It was close to two years ago that Lindsey Buckingham was fired by Fleetwood Mac, and in that time the band reconstituted with former Tom Petty and the Heartbreakers electric and acoustic guitar player Mike Campbell and Crowded House’s Neil Finn for a massively successful tour.

Now, in a new interview with Rolling Stone, drummer Mick Fleetwood was asked if he could ever envision the Mac reuniting with Buckingham (who sued the band and then underwent emergency open heart surgery), to which his answer was a resounding “no.”

“Fleetwood Mac is a strange creature,” he explained. “We’re very, very committed to Neil and Mike, and that passed away a time ago, when Lindsey left. And it’s not a point of conversation, so I have to say no.”

Fleetwood continued, “His legacy is alive and well, and as it should be. A major, major part that will never be taken away, and never be down-spoken by any of us. Neil and Mike have tremendous respect for Lindsey. The situation was no secret. We were not happy. It was not working, and we parted company. And that really is the all of it.”

As for whether Green, who wrote many of the group’s early songs before addiction and mental health issues led to his exit from the band, will play at the show, Fleetwood responded:

“No. But it seems he’s going to come. He wants to keep a very, very low profile, and that’s fine. This is about the journey Peter took into the music, and that music is still alive. Everyone that’s on this show has their own poignant story about being connected to that early band.”

If Green is not able to be there on the 25th to sing and play his songs, we have a suggestion as to someone that might be available to help out.