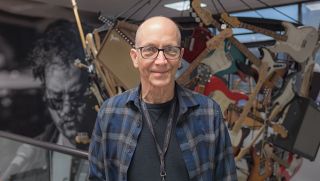 Fender has announced the retirement of Chief Design Engineer George Blanda, one of the original Custom Shop founding members, on April 3. Blanda has been with Fender for 35 years.

Blanda first joined Fender in 1985 as Senior Design Engineer in the newly-created Fender Custom Shop, and was initially tasked with making artist signature electric guitar models. He was soon recruited, by then Director of Marketing Dan Smith , to help overhaul Fender’s product in the wake of the CBS era.

Blanda helped establish the American Standard series, one of the most significant launches in Fender history, and went on to work on a variety of signature guitars, including the Yngwie Malmsteen, James Burton, Muddy Waters and Jimi Hendrix artist models. He was also instrumental to Fender’s working relationship with Eric Clapton.

“It’s hard to believe how much time has gone by,” Blanda said. “I’m going to miss the people the most, but I’m grateful to take all the memories with me.”

"Fender’s Custom Shop has earned the title ‘Dream Factory,’ and for 35 years, George Blanda has made the dreams of thousands of players come true,” said Fender CEO Andy Mooney in a statement.

“We will miss seeing George in Corona every day, but George’s legacy at Fender will last forever. I wish George the very best for his retirement and want to thank him for the enormous contribution he has made to Fender.”

In 2017, Fender celebrated the 30th anniversary of the Custom Shop with a documentary about its creation and development.