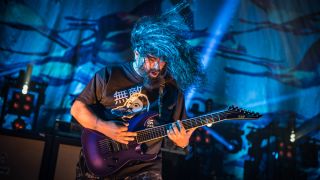 Writing the intro for GW’s tracks of the week is a reliably unenviable task, especially during the lockdown period. But this week, we’re grateful it can pretty much be summed up in a single word: Deftones.

Yes, the metalgaze juggernauts are back with Ohms, treading new ground while recalling their past glories. And while we can’t quite say all is well with the world, it makes a damn fine distraction.

Yes, it’s a feast of six-string delights, and we encourage you to get stuck in…

Quite possibly the most hotly anticipated guitar album of the year, Ohms has been a long time coming – and after the distinctly Stef Carpenter-lite Gore, we didn’t know quite what to expect. Thankfully, Ohms is awash with his influence.

That opening riff isn’t quite like anything we’ve heard before from Deftones – it’s in a major key, ferchristsake – but the way it swaggers and sways is instantly familiar. It sounds like we can expect a few fresh tones, too, if the gargantuan octaver sound on this tune is anything to go by. Oh, and the video also plays host to the debut outing for Carpenter’s nine-string, too. Bring it on. (MAB)

Musicians across the world have found ways to stay creative during the lockdown imposed by COVID-19. For Tyler Bryant and co., that has meant writing and gearing up to release a brand-new full-length, entitled Pressure.

The first fruits of the project dropped this week with the release of Crazy Days, a hopeful and topical rock tune that’ll surely get fans excited to hear more. Bryant has even drafted in his wife and fellow guitarist Rebecca Lovell - one half of roots-rock duo Larkin Poe - for both vocal and guitar duties. Blazing pentatonics and slide licks abound. (SR)

The queen of baritone guitar’s dark, ethereal solo offerings have always teetered on the verge of metal, but this collaboration with sludge-metallers Thou pushes Emma Ruth Rundle completely over the edge – and the results are spectacular.

The challenge of marrying her love of alternate tunings with Thou’s ultra-heavy single-note riffs led Rundle to describe this first brutal taste of their forthcoming album as an “obstacle course” of guitar playing “in the best way”.

A difficult birth it may have been, but Ancestral Recall already hints towards an album of the year contender: the way Rundle’s delay-heavy wails float atop Andy Gibbs and Matthew Thudium’s guttural grind is utterly spell-binding. (MAB)

Blues Pills – Rhythm In The Blood

Back in June, Blues Pills guitarist Zack Anderson joined us in an episode of Sick Riffs in which he taught you how to play Low Road, a track from the band’s eagerly awaited new album, Holy Moly!

Today, the album dropped and boy, does it contain some bangers. Rhythm In The Blood features a killer fuzz-laden guitar riff that’s sure to stick in your head on first listen, as well as a red-hot blues-rock solo. (SR)

Steve Lukather – Run to Me

Everyone’s favorite outspoken session guitarist and 7am neighbor-baiter returned this week with Run to Me, a feelgood anthem composed of a simple two-note riff over a ’60s-inspired chord progression.

Luke conjures some unreal feedback sustain for the track’s solo, too – almost like George Harrison if he plugged into a high-gain Mesa/Boogie. Which is especially appropriate given Ringo Starr is on drum duties. (MAB)

Emerging from the gate with an ominous clean tone, the guitars quickly evolve into the heavier tonality we’re used to hearing from the Arkansas quartet. If you’re looking to conjure images of dystopia this evening, here’s your tune. (SR)

Filled with attitude and catchiness in equal measure, this latest offering from the Toronto outfit oozes everything a punk fan craves - highly distorted guitars, musically full arrangements and impactful lyrics sung in a suitably aggressive manner.

Clocking in at just under two minutes, this one’s a sonic smash and grab, and we love it. (SR)

This cut of instantly classic-sounding indie-rock is less frenetic than what we expected, but the band’s sense of fun and energy are still here in abundance. (MAB)