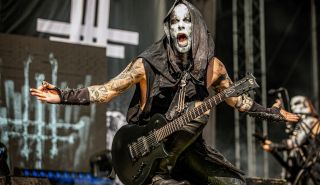 Even as the weather heats up, and more folks begin to poke their heads out from their coronavirus-induced self-isolation periods, here at GW, we’ve still got our ears sharply to the ground for the best in new guitar music.

Fortunately, even as the industry’s release schedule has slimmed down, as it does at the onset of every summer, we’ve managed to collect a wonderfully diverse bundle of new pieces of music.

From an experimental, avant-garde guitar blast from Bill Nace, to an all-too-timely, politically-charged hip-hop/metalcore crossover from I Prevail and Joyner Lucas, to a powerful, riff-heavy beast from Black Star Riders, we’ve got an embarrassment of riches this week.

So take a breather, disengage for a few minutes and enjoy some killer new tunes!

Earlier this year, Behemoth mastermind Nergal teased new music, telling us “we are really at the peak of our career: great shape, fucking hungry and ready to go”, and judging from Evoe, his bravado is well-deserved.

Evoe is taken from the sessions for I Loved You At Your Darkest, and marries past and present Behemoth perfectly, with devilishly atonal leads, groove-led chorus refrains, and a whopping great alt-picked solo from lead guitarist Seth (aka Patryk Dominik Sztyber). (MAB)

In a reimagining of a track from their latest album TRAUMA, Michigan metallers I Prevail unveil a new version of DOA - this time featuring rapper Joyner Lucas. It’s a fiercely political track in message, with impactful and potentially disturbing images in the video (viewer discretion advised).

Musically, the track features big riffs and a solid arrangement all-round. Evoking strong nostalgia for the nu-metal heyday of the early 2000s, it’s a stylistic knockout and a perfect example of why the mixing of genres creates some of the most powerful results. (SR)

A legend of avant-garde guitar who's made his name with challenging, varied but deeply-rewarding collaborations with the likes of Steve Gunn and Sonic Youth's Thurston Moore and Kim Gordon, Bill Nace has done just as much to push the guitar's boundaries in recent decades as any headline-grabbing, arena-headlining rock star.

His latest solo effort, Both, is an immersive collection of beautifully constructed, form-evading guitar improvisations - with the eighth and final piece on the record standing out as one of its most accessible and fascinating moments. Jagged, effects-washed riffing weaves beautifully with mournful cries of feedback, creating a desolate but spellbinding guitar soundscape. (JM)

One of classic-leaning hard-rock’s premier bands take a political turn with their latest single - Candidate for Heartbreak was first released on the deluxe edition of 2019’s Another State of Grace, but its message seems particularly prescient given the current state of the world.

The guitar work is exemplary as ever, given the pedigree of the band’s two players - the solo section sees Scott Gorham and Christian Martucci get busy with some trademark Lizzy-esque twin-guitar harmonies, before Martucci brings the leads home with some slick legato work. (MAB)

The Doors’ iconic Gibson-toting six-stringer releases The Ritual Begins At Sundown, his ninth solo album - and first in a decade - this year, and Hot Head points towards one seriously searing fusion release.

The American post-hardcore five-piece strikes again with Wasting My Youth, the fifth single from their upcoming studio album, To Better Days (expected August 2020).

It has to be said that the production on this track is damn-near perfect, and with all elements cutting through with great clarity, it puts the explorative guitar lines on full display. This one’s a true listening pleasure. (SR)

Painted Zeros - I Will Try

Painted Zeros, the band led by Brooklyn-based musician Katie Lau, are finally releasing their sophomore effort, When You Found Forever, a full five years after their solid 2015 debut, Floriography. From the sounds of it, the wait has been more than worth it.

The third single from the album, I Will Try, details Lau's renewed lease on life after three years of sobriety. During such a dark, unsettled time in the world, Lau's lyrical candor and triumphant outlook are incredibly refreshing - while bold 'n' loud guitars hammer the song's towering chorus home with authority. The twisty, math-indebted solo at the end wraps it all in a perfect bow. (JM)

Within Temptation - Entertain You

Dutch symphonic metallers Within Temptation have honed their craft over the last near-quarter-century, and each release seems to get better and better. Take Entertain You, the group’s first track since 2019’s Resist: a headbang-inducing riot with an earth-shattering guitar riff and an undeniably catchy chorus.

And it looks like we’re in for regular new music from the band, too, with vocalist Sharon den Adel stating: “We’re going to release a few singles every year – at least this year and next year, and then we’re going to drop the album.” (SR)

The latest single to land from Swedish indie-pop upstarts Hater was intended to support their now-postponed US tour with Radio Dept, but we’re glad they released it regardless.