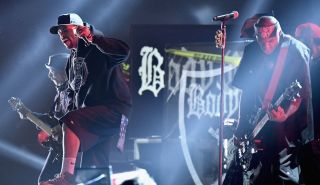 Happy Friday, everyone! Over the last week we've been keeping our eyes and ears out for the best and brightest in new guitar music, and man, were we ever spoiled for choice!

From a blisteringly political and hard-charging new track from metal veterans Body Count to a twisty, melodic rocker from Ohmme, this really might have been the most musically diverse week we've seen in guitardom thus far this year - not that we're complaining!

Get a taste of our favorites of the week below.

Yes, Thunderpussy have amassed an almighty reputation in a short amount of time, and with very good reason - Powerhouse is a raucous slice of rock ’n’ roll thunder that doffs its cap to Zeppelin and AC/DC, as well as Jet and The Black Keys. Here’s hoping we hear Whitney Petty’s oh-so-crunchy tones blaring from rock radio stations nationwide very soon. (MAB)

Listen to this song and then try to get it out of your head. Seriously, give it a shot! When it comes to earworm riffs and hooks, the Haim sisters really are like scientists.

Vocal harmonies that evoke the absolute best of Fleetwood Mac? Guitar leads that sound like they came out of a muscle car's stereo and through a time machine? In both cases without the accompanying musical excesses of that era? Doesn't get much better than that, does it? (JM)

Guitarists Ernie C and Juan of the Dead prove that simplicity is often the key in getting across such a powerful lyrical message, delivering the track's memorable main riff with fierce intensity. With this in mind, Bum-Rush is not without an impressive lead guitar moment, courtesy of the solo succeeding the first chorus. (SR)

S.G. Goodman has grown from her roots in Western Kentucky into one of the most promising voices in contemporary blues-rock. To achieve her blend of rootsy grooves, grinding guitars and folk lyricism, Goodman partnered with My Morning Jacket frontman Jim James - the resultant debut album, Old Time Feeling, lands on May 29.

Lead single The Way I Talk is awash with guitar textures, from the simple pentatonic hook to eerie behind-the-nut chimes and screeching feedback, all of which confirm that Goodman isn’t seeking to recapture her channelled genres’ storied pasts; rather, she’s rebuilding them in her own image. That album can’t come soon enough. (MAB)

Admittedly, it's a bit difficult to approach a new song called Rock & Roll with anything but a little weariness. Yes! Rock 'n' roll! We sure love it, don't we? As a songwriter though, Dave Benton can make anything sound unique, and the perspective he offers on his lovely new single as Trace Mountains manages to be both profound and refreshingly bereft of any of the clichés that usually come with a song of this name, or some variation of it.

If there's a line one can draw through to this from all of Benton's projects from years past (LVL UP, Spook Houses), it's his love of using six-string heroics as a measured, but powerful exclamation point to his songwriting. In that regard, Rock & Roll's spirited, beautifully executed closing solo - played by Stew Cutler - couldn't be more on the money. (JM)

Though this track was released a couple of months ago, the prog metal trio's sixth studio album Fluid Existential Inversions came out this week, so that's our excuse for putting this tech-y, time signature-fluid (eh?) masterpiece on this week's list.

With all manner of guitar techniques and effects employed throughout the track's almost 7-minute duration, there's something for every guitar-playing listener to enjoy, from gearheads to technique aficionados alike. (SR)

The Lemon Twigs - The One

The One is the first taste of new album Songs For The General Public, which lands on May 1, and showcases the band’s most refined take classic ’70s pop-rock, with big Supertramp vocal dubs, and leads that recall the melodicism of Brian May. (MAB)

When Perfume Genius dropped Eye in the Wall - a mind-bending, near-nine minute psychedelic odyssey of a track - last fall, it really made one wonder just where Mike Hadreas was going to take his next Perfume Genius album. More fascinating, but obtuse excursions into the unknown? More steamrolling, empowering epics a la 2017's No Shape? With Hadreas' new single, Describe, we finally have our answer.

Everything about Describe is huge - set to IMAX, surround-sound scale. Those guitars! Ornately cloaked in some of the most beautiful distortion this side of the 21st century - with some ethereal slide work thrown in for good measure - they're the perfect vehicle for a haunting, but incredibly captivating ballad for the ages. (JM)

From the deepest, darkest depths of Rotterdam, Netherlands, comes Dool, with one of the most tonesome takes on expansive, atmospheric rock we’ve heard of late, courtesy of a Tele/335/Starcaster triple-axe assault.

Wolf Moon features nods to prog with its harmonized lead lines and time signature changes, as well as classic rock with that big chorus hook. Baroness fans would do well to dive in. (MAB)

Fresh off tours with the likes of Wilco and Iron & Wine - and ahead of dates with Waxahatchee and Wye Oak - this Chicago-based duo deftly weave time-signature shifts (7/8 and 6/8, yes please) and cyclical guitar figures into melodic alt-rock that recalls Radiohead’s more sinewy six-string moments. (MAB)

While they bear both a strong visual and audial resemblance to veteran emo rockers My Chemical Romance, Creeper prove with Cyanide's slow tempo verses, huge choruses and spacey dual six-string lines, that they deserve to exist within a class of their own.