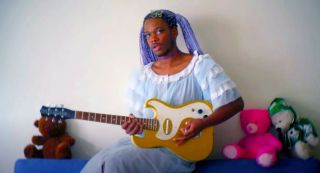 Worried that the onset of summer and loosening of coronavirus-related movement restrictions means less new music for us to sift through and present to you at the end of the week? Have no fear!

We certainly had our hands full with the glut of fantastic new guitar music we've seen in recent days, and as a result, have compiled what might be our biggest week-ending playlist to date.

As ever, we've included tracks to suit all tastes - from a thought-provoking genre-twister from the Run the Jewels, to a perfect slice of guitar pop from Shamir, to a hard-rocking number from Dragged Under and an ethereal piece of multi-guitar noise orchestration from Thurston Moore.

So open your mind (and ears) and see if you find something that strikes your particular fancy!

Shamir - On My Own

Philadelphia-based singer/songwriter Shamir Bailey has never been easy to pin down - moving nimbly from dance to bedroom pop to more experimental forms in the span of just five years. Now, with his latest single, On My Own, he can add crowd-pleasing, guitar-driven power-pop to that list.

Danelectro ’63 in hand, he punctuates the verses and ultra-catchy choruses with tightly coiled leads that almost bring Deerhunter to mind, while the bridges pop with punchy, radio-ready riffing. The leadoff single to Shamir’s as-yet-untitled upcoming album, this killer tune promises great things to come. (JM)

You might know Ryan “Fluff” Bruce for his hugely popular YouTube channel, Riffs, Beards & Gear. However, we would be remiss not to bring to your attention the latest work of his band Dragged Under, who just dropped their debut album The World Is In Your Way, along with a music video for the record’s sixth track Chelsea.

This sprightly ’90s-inspired outfit from Halifax, Nova Scotia might just be your new favorite power-pop band.

They certainly have the credentials: new album Dream or Don’t Dream was mostly written on Ash hook-meister Tim Wheeler’s sofa, while Dinosaur Jr lynchpin J Mascis lends his Jazzmaster wigout to this addictive sugar rush of a single. Big powerchords, dreamy overdubs and literally hundreds of pedals are the order of the day, and we love it. (MAB)

Phil X & The Drills - Right on the Money

Bon Jovi’s Phil X has been busy as of late, announcing his move from Framus to Gibson at NAMM 2020, and more recently participating in the guitar giant’s Riff Lord series.

Adding to his growing list of recent accolades, the guitarist has unveiled a new track from his band Phil X & The Drills entitled Right on the Money. Kicking off with a suitably crunchy blues-rock guitar riff, the song evolves throughout, with punk-influences seeping through and tempo changes offering continued intrigue. Legendary mix engineer Chris Lord-Alge offers his hand, polishing an undeniably tasty production. (SR)

Three albums in, Spain’s premier indie-rockers have lost none of their knack for lo-fi guitar bangers, and The Play channels peak Strokes with wiry staccato barre chord stabs and gnarly break-up leads. (MAB)

Run the Jewels - the ongoing, hugely-acclaimed project of rappers Killer Mike and El-P - could hardly have picked a better time than the present to drop RTJ4, their high-octane fourth collaboration.

As ever, the album finds the duo right on the money, expertly tackling systemic injustice, police brutality and the politicians that preside over these ongoing issues, with pinpoint rhymes and dense, expertly-crafted production that brings the heaviness when it needs to, but never overwhelms.

For pulling the pin, a storm-clouds-brew-on-the-horizon slow-burner of a track, the duo enlisted an unlikely pair of collaborators - Josh Homme and Mavis Staples. Amazingly, the Queens of the Stone Age frontman’s discordant guitar stabs are the perfect partner for the gospel legend’s haunting vocals and Mike and El-P’s unusually restrained, but precise-as-a-sharpshooter verses. A thought-provoking, perfectly timely genre-bender for the ages, this. (JM)

As it stands, NY metallers Emmure have released four tracks ahead of their upcoming album Hindsight. The latest - I’ve Scene God - is a sub-two-and-a-half-minute down-tempo metal onslaught, boasting drop-tuned dissonance and an inhuman level of chug.

Guitarist Joshua Travis offers simplistic, track-bolstering riffs, that work perfectly to bring out the brutality of the vocals and drumwork. (SR)

The avant-garde Sonic Youth genius dropped a new instrumental track in honor of the ‘Strawberry Moon’, a penumbral lunar eclipse associated with the advent of the strawberry season.

But we don’t really care about that. More important is that this nine-minute, three-guitar arrangement is awash with trademark Moore moves: irresistible clean Fender jangle, ethereal ‘prepared guitar’ overtones and a melodic and temporal progression that’s impossible to pin down. (MAB)

Recorded to raise money for the Jazz Foundation of America’s COVID-19 Musicians’ Emergency Fund, it shows that - even years after his retirement from live performance - one of the genre’s greatest ever guitarists hasn’t lost a single step, rattling off solos that dazzle with their speed, but never lose sight of serving the song they highlight. Sit back and watch a master at work. (JM)

The opening riff of this Bristol-based sonic onslaught is utter filth, fusing stoner mentality with sludge’s knuckle-dragging delivery. But the extreme dynamic shifts and frenetic tremolo picking point towards something more expansive - suffice to say, we’re looking forward to the arrival of debut album Royal Swan on July 3. (MAB)

During the quarantine period, guitarists certainly seem to have reconnected with videogaming and their associated soundtracks. Last week, we had Felix Martin and Ichika tackling a classic Zelda cut, and now Sithu Aye has turned his hand to a particularly Hetfieldian cover of Command and Conquer’s Hell March.

The self-producing prog-metaller lends his chugs and mutes a distorted tone as jagged as the heavy machinery that traverses the game’s warscapes. And those harmonized guitars and pinches are just *chef’s kiss*. (MAB)