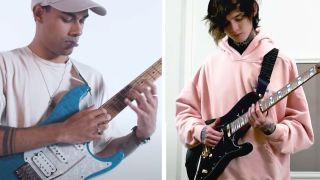 Itâ€™s that time of the week again! Weâ€™ve been on the lookout for some of the hottest new guitar music, so get ready to kick back and absorb some of the most tastefully crafted six-string bangers from the past seven days.

Weâ€™ve got a new collaboration between boundary-pushing virtuosos Unprocessed and Polyphiaâ€™s Tim Henson and Clay Gober, some silky acoustic goodness from both King Gizzard & The Lizard Wizard and Buck Meek, a previously unreleased track from nu-core legends Falling In Reverse and tons more.

Are you ready to expand your musical mind? Here we go.

Slap is officially back, baby - only these days, weâ€™re calling it thump. For proof, check out this collaboration between some of todayâ€™s most groundbreaking players, who used quarantine downtime to assemble this unexpectedly R&B-vibed jam.

The track is emblematic of the direction Polyphia has been moving in, but its crossover of djent and hip-hop influences is perhaps even more radical, with Fernandesâ€™s falsetto vocals even hinting at mainstream crossover potential. (MAB)

Itâ€™s been a big week for one of 2019â€™s breakout guitar stars. London-based Bea Kristi was revealed as one of the faces of Fenderâ€™s Player Series relaunch, and now the â€™90s-loving offset wielder has announced her debut album, Fake It Flowers, spearheaded by this anthemic monster of a single.

As youâ€™d expect from an artist who once released a song called I Wish I Was Stephen Malkmus, the guitar playing owes a lot to the golden era of indie-rock, with widescreen power-pop chords and sparkling clean melodies. We canâ€™t wait to hear more. (MAB)

Buck Meek - Roll Back Your Clocks

Though heâ€™s most well-known as the right-hand-man to Adrianne Lenker in Big Thief - adding splashes of six-string color and gorgeous vocal harmonies to the bandâ€™s ever-evolving and unpredictable blend of folk, tooth-gnashing riff rock and open-ended jamming - Buck Meek is a uniquely gifted songwriter in his own right.

A standalone single written in the midst of the coronavirus-induced worldwide lockdown, Roll Back Your Clocks is, in its own quietly affecting way, both timely and timeless.

Driven by Buckâ€™s plaintive strumming and given levity and incredible depth by gritty-but-expressive leads and textural additions from guitarist Adam Brisbin, this is a beautiful song that perfectly balances humility and fear in the face of an incredible crisis with the aim of, in the authorâ€™s words, bringing “some sense of peace” to the listener. On that, it delivers with aplomb. (JM)

Kingdom of Giants - Side Effect

The Californian six-piece add the techno-infused Side Effect to the pile of showstopping metalcore anthems thatâ€™s sure to make up their upcoming fourth studio album, Passenger.

Guitarists Max Bremer, Red Martin and Julian Perez trade hellishly drop-tuned riffs throughout over the top of thoughtfully placed synth arrangements, and the tried-and-tested clean/dirty vocal combination synonymous with modern metalcore. If youâ€™re a fan of the heavy, youâ€™ll dig this one. (SR)

James Dean Bradfield - The Boy From the Plantation

For his second solo album, Even In Exile, Manic Street Preachers frontman James Dean Bradfield turned to the remarkable life of Chilean poet, singer/songwriter and activist Victor Jara for inspiration.

Bradfieldâ€™s alternately anguished and gorgeous guitar work on the albumâ€™s latest single, the moving The Boy From the Plantation, manages to capture both the extraordinary triumphs and violent, tragic end of Jaraâ€™s life. If youâ€™re looking for an example of guitar playing telling a story as effectively as a set of lyrics, look no further. (JM)

Falling in Reverse - Carry On

Originally written for 2017 album Coming Home but ultimately shelved, Carry On ditches the heavy approach we often associate with the Vegas metal troupe in favor of a more emotive angle on songwriting.

Featuring simplistic yet impactful chord progressions and a fitting guitar solo, this oneâ€™s totally feel-driven, and itâ€™s a wonder how it never made it onto the record. In any case, enjoy this new offering from one of nu-coreâ€™s finest. (SR)

Stu Mackenzie has unveiled his latest experiments in microtonal playing, with this track written around what looks to be a custom acoustic from Morris Guitars.

A stripped-back version of the bandâ€™s trademark raga-rock, Honey proves that Mackenzieâ€™s idiosyncratic approach to melody transcends any arrangement. (MAB)

With a sound reminiscent of golden-era Sex Pistols, the solo artist has gone full punk with this one, and we love it. (SR)

The self-titled record from the peerless UK singer-songwriter lands today, and one of the highlights is this bewitching take on a choice cut from Radioheadâ€™s 2007 opus, In Rainbows, now with a video captured from a live session filmed earlier this month.

Building around a sultry bass groove, the trackâ€™s closing section sees La Havas indulge her rockier side, kicking in the overdrive on an absolutely gorgeous blue fade Gibson ES-335. The intense vocal performance lends a new pathos to Radioheadâ€™s original, too. (MAB)

Recorded live in one nine-minute take with a new rhythm section, Badlands sees Bristol's Black Foxxes take a more experimental path. The band are known for their huge emo-meets-grunge choruses, but this alt-rock epic eschews traditional structures to hypnotic effect.