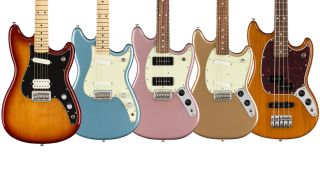 Replacing the Mexican Standard line in 2018, the Player series made headlines for bringing all the nostalgia and spirit of the Fender legacy to those shopping on smaller budgets.

Ever on the pulse, Fender has tapped up some of the most exciting guitar artists of today to promo the range, including the Black Pumas, The Regrettes, Omar Apollo and beabadoobee.

Read on for all the details on each model below.

Something of a cult favorite thanks to connection to Nirvana legend Kurt Cobain and modern pop-rockers The 1975, the Fender Mustang has now been incorporated into the Ensenada factory output.

The new model will feature an alder body, a maple neck and fingerboard with 22 medium jumbo frets, three single-coil pickups and will be available in Sienna Sunburst, Sonic Blue and Firemist Gold finishes. And it’s one of three new Mustangs in this year’s line-up!

Much like the Mustang, the Fender Duo-Sonic has always been one hell of an eye-catcher - particularly for fans of alternative and more underground noise or those looking for smaller body and more comfortable fit.

The brand new alder-bodied Player series models will be available in Tidepool, Desert Sand and an exquisite Seafoam Green, fitted with two Duo-Sonic single-coil pickups and a 24” scale length maple neck for thickness and clarity.

As seen in the hands of the bass players from bands as revered as The Rolling Stones and My Chemical Romance, the Mustang Bass has been notorious for packing a lot of tone into a lightweight and short-scale package, ideal for those with smaller frames or hands.

Classic appointments such as vintage-style Fender tuning machines and a vintage-style disc string tree - along with a four-bolt neck plate and standard four-saddle bridge  ensure that the new Mexican-made models will only build on that great legacy. The Player series models will be available in Sienna Sunburst, Aged Natural and Firemist Gold.

The Duo-Sonic also appears in a grunge-approved HS pickup configuration, wringing maximum versatility from the 24" scale length-format. Best of all, that humbucker can be split for single-coil sounds, too.

Otherwise, it's spec'd up as per the Duo-Sonic, and comes in Crimson Red Transparent, Ice Blue Metallic and Sienna Sunburst finishes, with maple or pau ferro fretboards.

The new Player Series Mustang 90, fitted with P90-style pickups, takes the vintage exploration in the Ensenada factory one step further - bringing classic grit and bite to Fender’s Mexican line. It’s the kind of instrument well suited to multiple gain stages and fuzz boxes, with a more hot-rodded sound compared to the glossy transparency Fender instruments have normally associated with.

Finished in Seafoam Green, Aged Natural or Burgundy Mist Metallic Gold, with the notable inclusion of a string-through-body for increased sustain, these will undoubtedly be a hit with those in seek of more high-powered vintage thrills.

See Fender for more info on all the new models.