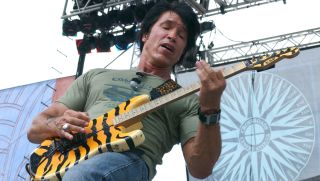 George Lynch keeps himself pretty busy these days, whether playing with KXM, the End Machine or his own band, Lynch Mob (not to mention the occasional guest spot with Dokken).

But apparently the electric guitar player has his sights set on another gig: shredding alongside Richie Faulkner in Judas Priest.

Speaking at a Pitbull Audio guitar clinic in San Diego in January, Lynch said, "I still to this day love Priest. I wish they would call me up and hire me.

Priest, of course, have been touring with producer Andy Sneap in place of longtime guitarist Tipton, who retired from full-time activities with the band following.a diagnosis of Parkinson’s disease.

Tipton told Guitar World in a 2018 interview: “With the medication and the time zone changes and everything else, I realized it was time to retire - from touring at least. I don’t ever want to compromise Judas Priest. It’s too big a part of my life.”

Priest, for their part, are schedule to kick off a 50th anniversary world tour in May.

In the meantime, if the band needs any convincing about George’s prowess, perhaps they should check out these scary Lynch-style licks.