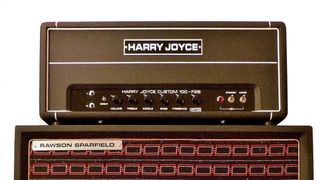 The all-tube, 100-watt head is paired with a 400-watt 4x12 Starfinder speaker cabinet for a package that the company says recreates the Gilmour guitar sound from classic Floyd tours with “pinpoint accuracy”.

How so, you may ask? For starters, there’s a built-in F2B preamp, the same circuit used by Gilmour to feed the output stage of his Hiwatt DR103 head.

In a further tip of the hat, the new amp is named for Harry Joyce, Hiwatt’s first engineer and wiring contractor, who, according to Rawson, built the forerunner of the original DR103.

Additionally, the Harry Joyce recalls the Hiwatt DR103 in its name plate design as well as its streamlined control layout, which features volume, treble, middle, bass, presence and master volume knobs and a bright switch.

According to Rawson, the amp will deliver “fat vintage clean tones at colossal volume with a staggering amount of headroom,” as well as natural compression for tons of sustain and big ringing chords.

The birch ply Starfinder cabinet, meanwhile, is built to the Sixties and Seventies specs of the cabs used onstage by Gilmour, right down to the speaker cloth pattern.

It comes loaded with four 100-watt DG12A 12-inch speakers that are reproduced to the same specs as the Fane Crescendo 12A, the 100-watt guitar speaker instrumental in helping to produce the early Floyd sound.

All in all, a Gilmour-ific offering of Floydian proportions.

For more information or to order, head to Rawson Sparfield. And careful with that amp, Eugene.