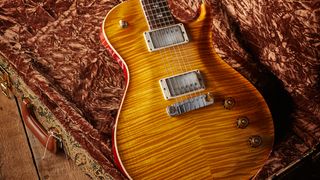 10 high-end PRS electric guitars have found their way into the hands of school kids in Anchorage, Alaska thanks to the U.S. Fish and Wildlife Service.

According to an article in the Anchorage Daily News, the guitars, shipped from the East Coast and bound for Hong Kong, were intercepted by Fish and Wildlife in July 2018.

The guitars were declared as clothing, but when inspectors opened the cases they found the instruments, which feature Brazilian rosewood, without CITES-required permits.

According to the ADN, Fish and Wildlife started a civil forfeiture proceeding and the instruments – shipped by a dealer, not PRS – were eventually given up.

After looking into whether another federal agency could use the guitars, Fish and Wildlife began seeking to donate or loan them to a nonprofit.

Which is how Bruce Wood, fine arts director for the Anchorage School District, wound up receiving a set of cardboard boxes from Fish and Wildlife.

He opened the first case to reveal a PRS with pearlescent bird inlay and Brazilian rosewood detail, and, he continued, “[f]or the next 45 minutes our jaws were on the floor opening all 10 of these.”

According to Chris Andrews, supervisory inspector with Fish and Wildlife, the guitars are available for the school district to use, but are still agency property and cannot be sold.

The PRS models will be used by the district’s high school jazz bands, the guitar and ukulele teacher and in other capacities.

“Paul Reed Smith makes guitars for Santana and, I mean, he makes the best in the world," Wood reportedly said at an Anchorage school board meeting, "and we now have 10 of them in our district.”