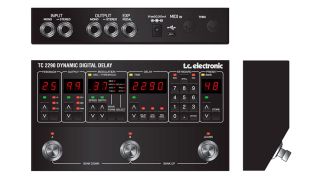 In TC Electronic’s pantheon of classic effects, the 2290 surely ranks among the upper echelons, and although models of its crystalline digital repeats have appeared in the company’s Flashback delay pedals, it looks as if the firm is finally readying a standalone pedal version.

TC Electronic recently posted images of two potential designs for a 2290 dynamic digital delay, complete with push-buttons, as per the original - one even has a keyboard for entering delay times.

Don’t get too excited, however, as the company commented that the device is “still in the ideas phase” - TC is just collecting feedback right now. Curses...

Of course, that’s not the only exciting pedal release the company has in the works, having teased a TonePrint Pedalboard just last week.