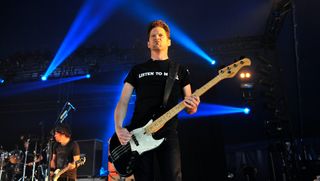 It’s been years since Jason Newsted has played in Metallica, and these days he doesn’t even play much bass, opting instead to reach for a guitar while fronting his own Americana-steeped Chophouse Band.

But the former Metallica man still has plenty to say about the old days, in particular about how some people took issue with the fact that he was a bassist who chose to play with a pick rather than his fingers.

“Back in the day, I wish I had the answers now when somebody talked shit like that. The most successful bassist of all time plays left-handed, and his name is Paul McCartney. He’s the only billionaire bassist that ever lived. He played with a pick.

“Gene Simmons is pushing a beat: 840 million. He plays with a pick. Metallica, 100 million records sold. The Black Album is one out of four all-time that’s been on the Billboard charts 500 weeks or more. So this guy played with a pick, too.”

Regarding the Chophouse Band, in which Newsted sings and plays guitar (including, in one photo accompanying the article, a Fender Acoustasonic Tele) he explained:

“We all get along great because there’s not money involved. They’ve got their own bands, their own families, their own gigs. We do benefit gigs, six a year, and that’s it. I record and write and play songs the whole rest of the time.

"They could all run circles around me musical theory-wise. They could tell you everything they’re playing, and all the relating chords.

"I surround myself with the bad-asses, and they make me look really good. I’m playing cowboy chords the whole time, and they’re doing their fancy shit to make me look good. I just concentrate on singing, and getting across the things I want people to hear.”