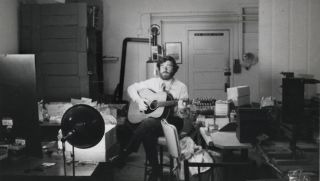 Jim Dunlop Sr., founder of Dunlop Manufacturing and guitar accessory pioneer, has died at the age of 82.

A massive presence in the guitar industry for more than 50 years, the Dunlop name is synonymous with everything from picks and slides to capos and effect pedals. Among the most famous of Dunlop’s products is the Tortex guitar pick, as well as the Cry Baby wah, a fixture on seemingly every guitarist’s pedalboard for generations. Dunlop has also produced iconic effects like the Heil Talk Box, the Uni-Vibe and the MXR line of stompboxes.

Dunlop Sr. was born in Glasgow, Scotland in 1936. He founded the Jim Dunlop Company in 1965 as a part-time business while working as a processing and chemical engineer. Not long after, he relocated to Canada, but only briefly. “I got a postcard from a friend of mine,” he recalled in an interview posted on JimDunlop.com. “It had a picture of a bikini-clad lady and said it was 90 degrees in Muscle Beach. It was 12 degrees below in Ottawa. I decided I’m getting the hell out of here.”

In San Francisco he began working as a machinist, but as a guitar player and hobbyist he continued to work on guitar accessories on the side. His first effort, a product called the Vibra-Tuner, didn’t take off, but his next inventions, the 1100 and 1400 model capos, were a hit.

He then moved on to picks and slides, building his business, now located in Benicia, California, along the way. “I really just wanted to make something that musicians would use,” he said of getting into plectrum manufacturing. Then, in the early Eighties, Dunlop maneuvered into a market that would change the company’s fortunes, bringing the then-defunct Cry Baby brand into the fold.

“It changed the whole direction of the company,” said Dunlop’s son, Jimmy Dunlop. “It was very uncharacteristic of the products that we were working with at the time. You’ve got this guy who was a machinist, who made accessories like slides and picks and capos, and he just jumped right into the number-one-selling electronics product of all time—the number-one pedal of all time. There was no caution, no hesitation, and the word ‘failure’ was not in his vocabulary.  He just said, ‘I don’t know what it’s all about yet, but I’m going to figure it out.’ ”

Later on, Dunlop also acquired the MXR line, eventually becoming, for all intents, as much an electronics company as an accessories brand. In addition to picks, slides, capos, strings, guitar straps, strap locks and any number of tools, there was the Cry Baby and MXR pedals like the Phase 90 and Super Badass Distortion, as well as a line of Hendrix items like the Uni-Vibe and Octavio and signature effects with guitar icons from Slash and Eddie Van Halen to Zakk Wylde and Dimebag Darrell, among many others.

In fact, it’s safe to say that, today, virtually every guitarist, from the bedroom players to multi-platinum, arena-stage-dwelling legend, has at some point in their musical life used a Dunlop product.

Following Jim Dunlop’s passing, musicians ranging from Buddy Guy and Joe Bonamassa to Kirk Hammett and Joe Satriani took to social media to pay their respects. But perhaps Dream Theater’s John Petrucci said it best: “Thank you Jim Dunlop Sr. for all of the joy and innovation you’ve brought to the world of guitar.”

Remembering Jim Dunlop, 1936–2019: Founder of Dunlop Manufacturing and enormously influential innovator of picks, capos, and other guitar accessories, Jim dedicated his life to making it easier and more enjoyable for musicians to express themselves. Driven by a fearless, innovative spirit, he tirelessly sought out ways to improve and expand the options available to players around the world. Today, we remember his contribution to music history. For more of Jim’s story, click the link in bio. Jim Dunlop