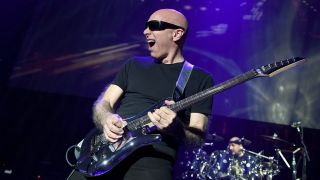 It’s rare to see Joe Satriani without one of his signature Ibanez JS electric guitar models in his hand. There he is, in fact, holding the chrome version of the instrument on the cover of his new album, Shapeshifting.

And while that chrome guitar is also the primary instrument Satch used on Shapeshifting, he also reveals that there’s another six-string that appears on virtually every one of his albums since the early '90s, and (gasp!) it’s not an Ibanez.

Rather, it’s a vintage Fender Esquire.

“This one’s my favorite,” he says in a new interview with Guitar Player. “I’ll never get rid of this guitar. Chris Kelly, who used to work at Ibanez, found it for me back in ’92, I think. He called me one day and said, ‘I found this Esquire. You have to have it!’ And I purchased it over the phone. This is before there was Reverb and eBay and stuff like that.

"It wound up on the Extremist album right away, and over the years it’s been on just about every album. I’ve used it clean, dirty, with slide, for power chords… It’s a beautiful guitar. And again, it was like the neck was personally made for me. I don’t know how they did that back in 1958!”

The Esquire might be Satch’s favorite vintage guitar, but it’s far from his only one. Elsewhere in the interview he shows off a ’69 Les Paul Custom, a ’66 Fender Electric XII and other classic axes in his collection.

You best check them out now, because some of them might not be around for long.

"I’ve been aggressively shedding vintage guitars for the last 10 years or so,” he says. “I used to have about 30 or 40, and I like to use them alongside my Ibanezes to round out the tones on the albums.

"But lately I’ve been trading and trading, and selling and selling, because there’s a lot I have that other people would probably love to play too.”