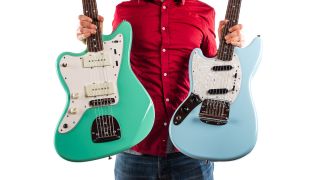 Chicago Music Exchange has announced the release of an exclusive collection of left-handed Fender Made In Japan Traditional Series offset electric guitars.

CME is offering the lefty Jazzmaster for $1,199.99, and the Mustang and Jaguar for $1,099.99. For more information, head over to Chicago Music Exchange.

In the meantime, watch Tuareg-style left-handed player Mdou Moctar put the Fender MIJ lefties through their paces below.